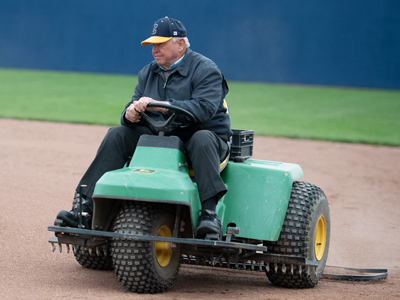 Pete and Gene are both natives of Cedarville and graduated from Cedarville High School in 1956 and 1953, respectively.

The athletic fields named for Pete and Gene encompass all of Cedarville’s outdoor sports venues.

After finishing high school, Pete enrolled at what was then Cedarville College, graduating in 1960. He was a dominant force on Yellow Jacket basketball teams, scoring 1,930 points in the days before the 3-point shot and had 1,027 rebounds. He is No. 7 all time for shooting and No. 8 for rebounds in the Cedarville record books. In 1984, Reese became a charter member of the Cedarville University Athletic Hall of Fame, and his number 43 jersey was retired by the Hall in 2005.

Gene was a lifelong farmer in Greene County, raising cattle and pigs and growing crops on what became 1,800 acres.  He invested in the village of Cedarville, purchasing three buildings that housed apartments and businesses, and supported community activities like the Cedarville Township Volunteer Fire Department’s pancake breakfast and the Cedarfest Labor Day celebration.

He was a collector of antique tractors and equipment, which he enjoyed demonstrating at community events. He was a firm believer in showing kids farm life and would take children for rides on tractors or in his combines.

He and his wife, Joyce, married in 1956 and have two children, Gina and Steve, who still live in Cedarville. Gene attended Cedarville United Presbyterian Church. He passed away in November 2019.

After 23 years’ service at The Master’s University in Los Angeles, Pete returned to his alma mater in 1988. He served as assistant men’s basketball coach from 1988 to 1997, then as the university’s director of athletics from 1998-2008. He supervised the outdoor athletic facilities staff from 2008 until his retirement in 2017. The Master’s University soccer field is named for Pete.

Together, the Reese brothers built Cedarville’s varsity soccer fields. Twice. Pete also oversaw the construction of the current baseball/softball complex, the Elvin R. King Cross Country Course, and multiple practice fields. Gene provided the large equipment to excavate and grade the property that would become Cedarville’s tennis courts, baseball and softball fields, soccer fields, and the Elvin R. King Cross Country Course. Pete has often commented that the fields could not have been built without the time, equipment, and talent that Gene provided.

The athletic fields named for Pete and Gene encompass all of Cedarville’s outdoor sports venues. The renaming will not replace the names for existing venues. For instance, the cross-country facility will continue to honor legendary coach Elvin R. King, and the course will be called the Elvin R. King Cross Country Course at the Pete Reese and Gene Reese Athletic Fields.

In 2002, the Cedarville University Alumni Association honored Reese with its Distinguished Service Award for his outstanding contributions to the university.

The National Association of Collegiate Directors of Athletics recognized Pete as the athletic director of the year for the northeast region of NAIA in 2004-05.

To further the Reese legacy, the athletic department honors a senior male and female athlete each year with the Pete and Joyce Reese Award, named in honor of Reese and his wife, Joyce, a Cedarville Hall of Famer for meritorious service.

Pete is currently a member of four Halls of Fame:

Located in southwest Ohio, Cedarville University is an accredited, Christ-centered, Baptist institution with an enrollment of 4,550 undergraduate, graduate, and online students in more than 150 areas of study. Founded in 1887, Cedarville is recognized nationally for its authentic Christian community, rigorous academic programs, strong graduation and retention rates, accredited professional and health science offerings, and high student engagement rankings. For more information about the University, visit www.cedarville.edu.