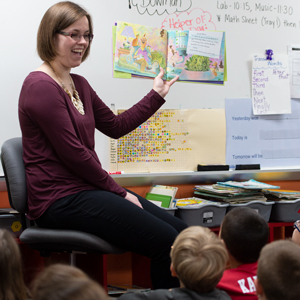 Graduating as a teacher herself in 1975 from Penn State University, Janet taught as a special education teacher in the public schools for 36 years. Because of this, Rebecca and Hannah were exposed to education and teaching on a daily basis from a young age.

“My mom was my role model of how to interact with students,” said Rebecca. “She is my go-to person for questions, and I wanted to be a teacher because of it.”

“You could see their hearts to serve as teachers at an early age,” said Janet. “It was evident that God had gifted them both.”

"If you want a program that is grounded in biblical truth and provides a rigorous program in education that excels in developing competencies for teaching, send your children to Cedarville!”

Choosing a college was an overwhelming process, explained Janet. She encouraged her daughters to research Christian universities. After reading through several universities’ mission statements, they visited Cedarville as a follow-up to a high school college tour.

Hannah immediately fell in love with Cedarville’s education program, while Rebecca was more hesitant. But after prayer and discussion, both daughters chose to pursue education at Cedarville, double majoring in special education and early childhood education.

“One factor that drew the girls in was hearing the impact of chapel,” said Janet. “Cedarville students were saying that they had the amazing opportunity to go to daily chapel instead of the requirement to go.”

Regarding the education program, a highlight for Hannah was experiencing a variety of educational settings with diverse learning opportunities and a variety of ages and children with different learning abilities. These experiences were supported by professors who came alongside to guide the entire process.

Rebecca appreciated how quickly she was able to serve in a real classroom through some of her early undergraduate coursework. This helped her deal with the jitters and gave her an advantage when she began to student teach.

“Cedarville not only taught content and pedagogical knowledge but developed skills and methods for teaching,” said Janet. “They also provided extensive opportunities for practical application in real classroom settings under the guidance of mentor teachers and dedicated professors who invested in students.”

Janet explained that over the years she had multiple student teachers in her classroom that had not received the level of training her daughters benefitted from prior to student teaching.

“I never felt like I was talking to college students when we discussed teaching,” said Janet. “Hannah and Rebecca were talking about best practices, topics like formative and summative assessments, data collection, behavior plans and other topics on the level of experienced teachers. Cedarville has an incredible program.”

Hannah continues to communicate with her advisor, Dr. Lynn Roper, assistant professor of special education. She explained that now they are colleagues, and she relies on her continued feedback and advice.

Hannah currently teaches in the North Penn school district as a sixth-grade teacher in a full inclusion setting. Rebecca is teaching outside of Cleveland, Ohio, as a fourth-grade intervention specialist.

“I can’t openly talk about Jesus in my job now,” said Hannah. “But Cedarville taught me how to weave a biblical worldview into all of my lesson plans.”

“When I am asked about the experience of my daughters at Cedarville, I tell people, ‘If you want a program that is grounded in biblical truth and provides a rigorous program in education that excels in developing competencies for teaching, send your children to Cedarville!” concluded Janet.

Located in southwest Ohio, Cedarville University is an accredited, Christ-centered, Baptist institution with an enrollment of 4,380 undergraduate, graduate and online students in more than 150 areas of study. Founded in 1887, Cedarville is recognized nationally for its authentic Christian community, rigorous academic programs, including the Bachelor of Arts in Special Education program, strong graduation and retention rates, accredited professional and health science offerings and high student engagement ranking. For more information about the University, visit www.cedarville.edu.