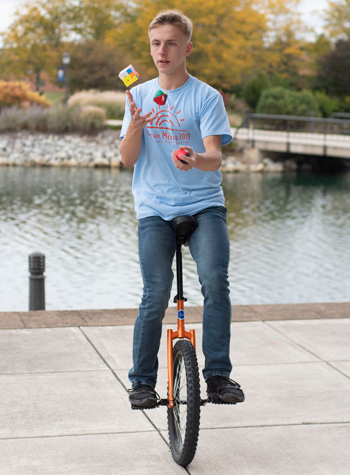 Solving Rubik’s Cubes is no small matter for Cedarville University brothers Thaddeus and Ivan Krueger, from Beavercreek, Ohio. Sometimes it includes a unicycle and juggling balls. At other times, it’s quite a feat. Or is that feet?

“At first it was very satisfying because the cube was such a mystery to me, but once I learned, it became a personal challenge to get my time as low as possible,” said Ivan.

In 2018, Ivan held qualifying times for 16 of the 18 national Rubik’s Cube events, which entails having an average solve time under 40 seconds for the traditional cube. Wanting to qualify for every event pushed Ivan to practice at least three hours a day for two straight weeks at the most unusual Rubik’s Cube event: solving a 3x3 cube with your feet.

While practicing, Ivan experienced foot pain to the point that walking became a challenge. But determined to qualify for every event, Ivan competed at Flag City Spring 2018 in Findlay, Ohio, and broke the state of Ohio record for a feet-solve by finishing in 38.46 seconds.

“I knew how to solve a Rubik’s Cube, juggle and ride a unicycle, so why not mix them together."

To view the video of Thaddeus juggling and solving a Rubik's Cube while unicycling, click on the video below:

Two months later, Ivan learned that he had actually pulled a muscle in his foot while practicing. But with a little rest, he was still able to compete in all 18 events at CubingUSA Nationals 2018 in Salt Lake City, Utah. Only nine of the 907 competitors at nationals participated in all events.

“Learning to solve a Rubik’s Cube with my feet helped me realize that if I set my mind on something, I'm pretty good at figuring it out, even if I’m not good at it in the beginning,” explained Ivan. “This mindset has helped me with other problems too. If I actually put in the time and push through the pain I can accomplish a lot.”

On the other hand, Thaddeus, a sophomore mechanical engineering major, decided to take cubing in a different direction.

Friends challenged Thaddeus to juggle, a skill he had already acquired while solving a Rubik’s Cube. Thaddeus spent hours learning how to identify the next move on his cube while it was flying in the air and how to catch the cube in a way that allowed him to perform a move in the brief moment the cube was in hand before tossing it again.

Eventually, Thaddeus conquered juggling and solving a Rubik’s Cube, but there were around 10 others in the Rubik’s Cube community who had the same skill. So, Thaddeus began searching for another avenue to elevate his Rubik’s Cube skills.

“I knew how to solve a Rubik’s Cube, juggle and ride a unicycle, so why not mix them together,” said Thaddeus.

Thaddeus learned to stall or stay in one place on a unicycle before he put all three talents together. But on June 23, 2019, Thaddeus became the first person to solve a Rubik’s Cube while juggling and riding a unicycle.

“I have always loved being able to do things that I have never been able to do before,” explained Thaddeus. “I push myself in whatever I am doing, whether it is school or activities, and this talent is just proof of that.”

The Krueger brothers don’t have enough time in college to be as competitive with Rubik’s Cubes as they once were, but they have enjoyed passing their love of cubing onto other members of their family. To date, they’ve taught their 80-year-old grandmother and 4-year-old sister to solve the cube.

Located in southwest Ohio, Cedarville University is an accredited, Christ-centered, Baptist institution with an enrollment of 4,550 undergraduate, graduate, and online students in more than 150 areas of study. Founded in 1887, Cedarville is recognized nationally for its authentic Christian community, rigorous academic programs, including its Bachelor of Science in Mechanical Engineering and Bachelor of Science in Electrical Engineering programs, strong graduation, and retention rates, accredited professional and health science offerings, and high student engagement ranking. For more information about Cedarville University, visit www.cedarville.edu.