Songwriter Gets 100,000 Streams on Spotify 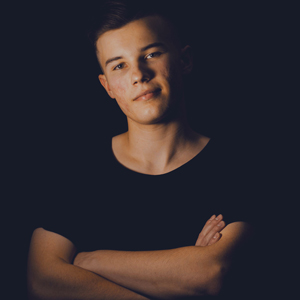 Noah Ayers, a Cedarville University junior worship major, released his song “Open Arms” on May 15, and it has already reached 100,000 streams on Spotify worldwide.

“I love telling stories through songs,” said Ayers. “I love to write about things I have gone through or try to put myself in someone else’s shoes to tell their story. Being able to tell the story behind a song and getting to share the gospel in a unique way that can connect with somebody is why I do this.”

Ayers, who has a minor in music technology and broadcasting, has been interested in music production since he was 12 years old. He started by recording cover songs, but during his sophomore year of high school, he started writing worship songs. Knowing he wanted to share those stories, he started to record and release them.

Being able to tell the story behind a song and getting to share the gospel in a unique way that can connect with somebody is why I do this.”

When he began recording, Ayers only had a laptop, keyboard, inexpensive mics, and a simple audio interface. Since then he has created a home studio, which streamlines his 150-hour process of producing a song.

For the last four months, Ayers has had approximately 15,000-20,000 monthly listeners on Spotify. Multiple songs of Ayers have reached 3,000 streams individually.

Regardless of the success of some of his newer songs, Ayers still holds the deepest connection with one of his earliest songs, “God My Father,” which he wrote after his family moved from Texas to Ohio.

“That move was really tough for me because I had a lot of plans and dreams down in Texas that I had to leave,” explained Ayers. “What I had to learn was to surrender control over to God because, ultimately, we don't have control over our lives. If I spent all my time trying to gain that control back, it would have been a massive waste of time. I needed to learn to focus on looking up and being who God wanted me to be before looking ahead to the next thing coming.”

After college, Ayers hopes to begin a touring ministry as a Christian artist or become an artist in residence at a church. To listen to all of Ayers’ music or to book him, visit noahayers.com.

Located in southwest Ohio, Cedarville University is an accredited, Christ-centered, Baptist institution with an enrollment of 4,550 undergraduate, graduate and online students in more than 150 areas of study. Founded in 1887, Cedarville is recognized nationally for its authentic Christian community, rigorous academic programs, including Master of Arts in Worship and Leadership and Graduate Certificate in Worship Leadership programs, strong graduation and retention rates, accredited professional and health science offerings and high student engagement ranking. For more information about Cedarville University, visit www.cedarville.edu.