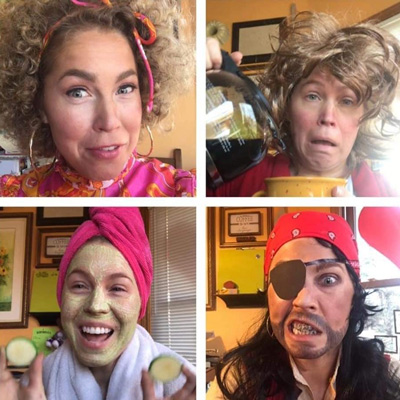 Yoda teaching English grammar? Mixed up idea, it is. Unless you’re Cedarville University alumna Heidi Bruder trying to spice up language arts for her suddenly online fifth- through seventh-graders at Calvary Christian Academy in West Branch, Michigan. Then it’s an idea that would make a Jedi master proud.

Besides the beloved mentor of Luke Skywalker, Bruder has also dressed up as a rock star, Harry Potter, a ventriloquist puppet and a Picasso painting, all with the goal of engaging her students virtually.

To see Heidi Bruder's creative teaching style, click on this news story from WDTN in Dayton.

“I’ve always had these talents that I have thought were worthless. I had wondered to the Lord why he had given them to me. I guess it was for such a time like this.”

Bruder worked three years as a teacher after graduating from Cedarville in 2003. Then, she spent the next 13 years raising her four children. Last year, her youngest started kindergarten, so Bruder began teaching again.

Bruder usually teaches a very interactive class, so this March when students switched to online learning, she was at a loss for what to do.

“Switching to online learning was heartbreaking for me,” explained Bruder. “It was hard for me to want to make the videos and teach the lessons because everything I loved about teaching I felt was being stripped away. But I was convicted by what I tell my kids all the time: Whatever you do, do it for the Lord.”

As Bruder began preparing for her first video lesson, she tried to relate to her students. Deciding they were probably just as unenthusiastic as she was about online learning, she chose to embody their dread by dressing in all back, completed with her son’s eye black as lipstick and heavy black eyeliner.

“I knew that these kids, who are so conditioned to an interactive classroom, were going to dread having to sit in front of a screen for school,” said Bruder. “I wasn’t expecting to get tons of responses from this age group, so just hearing that they thought it was funny convinced me to throw on something different the next day.”

Bruder raided her attic to find a costume bin, and a friend even left costumes on Bruder’s front porch for her to use for her daily videos. But even with no prior experience, Bruder is relying more and more on makeup looks found on Pinterest since they don’t require as many accessories.

“It’s funny because you don’t know what you can do until you try,” said Bruder. “I’ve always had these talents that I have thought were worthless. I had wondered to the Lord why he had given them to me. I guess it was for such a time like this.”

The large amounts of interaction on Bruder’s page show just how successful these characters have been.

“Learning is hard, and we expect the student to work hard. But work can also be fun, so we try to do both,” said Bruder. “Even if my students are tired of school, they still want to sign on to see what I am going to wear. If I can just get them to click on the video, they will stick around.”

Located in southwest Ohio, Cedarville University is an accredited, Christ-centered, Baptist institution with an enrollment of 4,380 undergraduate, graduate and online students in more than 150 areas of study. Founded in 1887, Cedarville is recognized nationally for its authentic Christian community, rigorous academic programs, including the Bachelor of Arts in Middle Childhood Education, strong graduation and retention rates, accredited professional and health science offerings and high student engagement ranking. For more information about Cedarville University, visit www.cedarville.edu