The Congo Prepared Nurse for COVID-19 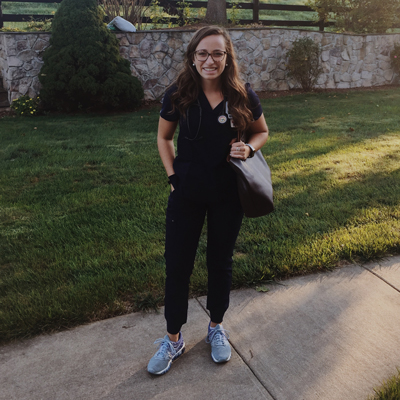 Virginia Walker, a 2019 Cedarville University nursing graduate, was nicknamed “Sunshine” by her nursing unit. This nickname perfectly describes how she shines Christ’s love to every COVID-19 patient she is currently treating in Inova Loudoun Hospital’s emergency room in Lansdowne, Virginia.

But Walker’s journey began long before COVID-19 entered America. After she graduated from Cedarville and before she started her position at Inova, Walker served with a missionary couple in Impfondo, a tiny remote village in the northeast Republic of the Congo. The couple operated a 70-bed hospital with the help of less than a dozen Congolese nurses.

“I had told the Lord that if he got me through nursing school, he could have my nursing degree and take me anywhere,” said Walker. “He took that very literally.”

Walker was tasked with running the emergency room (ER) with the help of one Congolese nurse. In the ER, Walker mainly saw patients struggling with the aftermath of Ebola and malaria, which kills almost half of the children under 5 years old in the village every year.

“I don’t ever want to be a nurse who doesn’t have the capacity to feel for my patients, because it is when you crawl down with them into those moments that the door opens to share the Gospel." 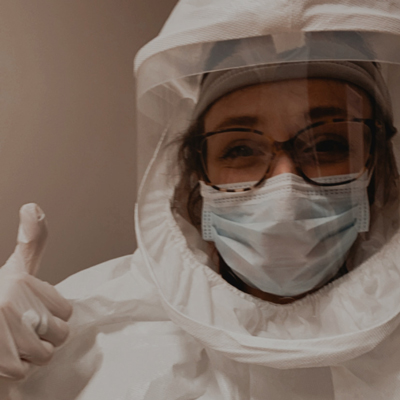 Shortly after arriving, the missionary doctor left to treat his ongoing medical condition. Walker became the only English speaker in the hospital.

“There were so many people dying, and it was horrifying to me,” she explained. “I struggled with the disconnect of what I knew God’s glory to be and seeing it amidst so much suffering. The goodness of God I saw my whole life felt so out of touch with my reality, which allowed me to honestly wrestle through my faith.”

One especially hard case was a 6-year-old girl named Lili. Walker fought for Lili’s life for 12 hours straight, but in the end, Walker listened through a stethoscope as Lili’s heart beat for the last time.

“The enemy seems to be able to take so much,” said Walker. “Yet that night, I felt the Lord’s presence telling me that this is what He goes through for me. I pursued saving a life for 12 hours, but he pursued me with his whole life.”

“This pain hurts the Father so much that he was willing to come down to take that pain on himself. This is where God’s glory is seen. It is not in thanking God for death and sickness, but it is in thanking the Lord for what he has done in light of his promise that one day this pain will end.”

Once coming back to the United States and starting her job at Inova, Walker saw the dark side of being a night nurse in the ER. Faced daily with domestic violence, drug overdoses, suicide attempts and miscarriages.

“I don’t ever want to be a nurse who doesn’t have the capacity to feel for my patients, because it is when you crawl down with them into those moments that the door opens to share the Gospel. The second I find myself becoming callous to the feelings of others is the time I need to stop being a nurse,” explained Walker.

At first, Walker didn’t feel confident discussing her faith with her co-workers and didn’t feel like the short time with her patients was having any impact on them. With the beginning of a new year, Walker felt the Lord requesting boldness as her New Year’s resolution. Little did she know what else the new year was going to have in store.

As COVID-19 began to increase in the states, Walker found the entire nation asking the same questions she had just asked four months earlier in the Congo. “How can God be good if he allows all this pain to happen? Where is God in the midst of suffering?” But Walker was now prepared to answer those questions.

Though this coronavirus pandemic, Walker has seen the hearts of her co-workers soften toward the Gospel and has had numerous opportunities to share the love of Jesus with her patients. But Walker has also seen a strange connection this virus has to her faith.

“You can't see COVID, but you know it’s there. Why? Because the whole world sees its effects: sickness, solitude and even death,” explained Walker. “Similarly, I can’t see God. I’ve never seen him, but I believe in him solely because of how I’ve seen what he’s done in my life. The Lord entered the world and took on every pain, endured it, died for it and defeated it. So that all this pain, sickness and death will one day end! That is worthy of praise.”