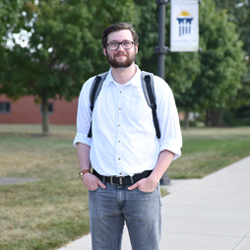 A lot of students struggle as they transition to college. But for Chris Ham, a freshman at Cedarville University, any difficulties he’s had have been far outweighed by the truth that for him, attending college is nothing short of a miracle.

You can hear his story on Moody Radio here or watch his interview with the Christian Broadcasting Network here.

Ham was born in Tulsa, Oklahoma. But even before he was born, he was in a fight for survival. “It’s such a harsh thing to say, but I’m a failed abortion, twice,” Ham said. “It’s interesting to see that before my first breath, God was protecting me.” His mother attempted two unsuccessful self-induced abortions.

He also moved frequently, all by the age of 6. His family relocated to Red Oak, Iowa, when he was 2, then to Janesville, Wisconsin, when he was 6 years old.

”God, I know you can get me out of this or you could leave me here, but whatever your will may be, that’s what I want."

Moving to Wisconsin was life-changing for Ham.

Growing up, searching for food was a way of life. His mother, a heavy substance abuser, and stepdad used the family’s trailer to sell hard drugs. At one point, they even attempted to create a methamphetamine lab.

One evening, after a physical fight between his mother and stepdad, Ham was sent to the neighbors in Janesville, the Doelys, for the weekend. That weekend would change his life forever. The father, Troy Doely, told 11-year-old Ham about Jesus and gave him a Bible.

”God, I know you can get me out of this or you could leave me here, but whatever your will may be, that’s what I want,” Ham prayed. “You have saved my life on so many occasions, the least I can do is to give it back to you.”

But life did not get easier for Ham. He recalled nights his mother would force him to sleep in a cold, dark tin shed. Government services attempted to remove Ham from the abusive environment 15 times, but each time he declined.

“Oftentimes your hope for escaping your abusers is outweighed by your fear of what happens if it doesn't work,” Ham said.

When Ham was 18, he attended a winter retreat with his church youth group, where he shared his story with camp leaders Josie and Scott Pinnow. The couple, who lived in nearby Fort Atkinson, Wisconsin, offered Ham an escape from his difficult home life. At first Ham was hesitant, but after prayerfully considering it, he accepted and moved in with his new family.

“We had an extra bedroom and had always prayed that God would show us who to give that room to,” Josie Pinnow said. “At first we were only going to help Chris get on his feet, but God had put family on our hearts and we knew that Chris needed a family. It seemed like a natural transition to make him our son because he felt like our son. We love him just like he was our own.”

At that point, as a high school senior, he still sensed a call to ministry. Ham began researching and visiting colleges. He learned about Cedarville University through his new sister, Evilyn Pinnow, who is a sophomore majoring in communication at Cedarville. This past April, Ham visited the campus.

“Cedarville’s Master of Divinity degree and having chapel every day was what made me choose Cedarville.” Ham said. Now a biblical studies major, Ham is thriving in his new environment.

“Attending Cedarville, studying theology, joining a discipleship group, eating breakfast every day, and then going to chapel afterward is all a reminder of ‘God you really have rescued me, so this is me giving my life back to you,’” Ham said.

Ham is currently running for freshman class chaplain. After college, Ham plans to be a senior pastor.

“If God wants me to go to California and pastor a megachurch, so be it. If he wants me to lead a 100-person congregation and work part time as a carpenter, that’s fine as well.” Ham said. “I just want to shepherd some of God’s flock to the best of my ability.”

Located in southwest Ohio, Cedarville University is an accredited, Christ-centered, Baptist institution with an enrollment of 4,380 undergraduate, graduate and online students in more than 150 areas of study. Founded in 1887, Cedarville is recognized nationally for its authentic Christian community, rigorous academic programs, including the Bachelor of Arts in Biblical Studies, Master of Ministry and Master of Divinity programs, strong graduation and retention rates, accredited professional and health science offerings and high student engagement ranking. For more information about the University, visit www.cedarville.edu.