2021 Graduate is ROTC Cadet of the Year 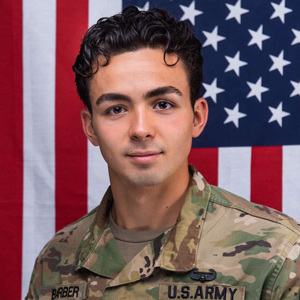 James Barber, a 2021 Cedarville University graduate in accounting, was recognized as Cadet of the Year by the Central State University Reserve Officers’ Training Corps (ROTC) program.

Out of nearly 20,000 cadets nationwide, Barber was one of 273 cadets to be honored with the award. Recipients were selected from regional ROTC programs after their grades, academic standing and leadership potential were assessed, and they attended a virtual leadership conference where they received training from general officers.

Barber noted that being recognized for leadership potential is evidence of his growth during his four years at Cedarville.

“I’ve always been somewhat of a leader and wanted to take control and do it my way. When I came to Cedarville, I was lacking in servant-leadership,” said Barber.

“Through my time here, I’ve realized that the greatest leader ever was Jesus. Ultimately, he was at the top, but he brought himself to the bottom — and that’s the ultimate picture of servant-leadership.”

“Through my time here, I’ve realized that the greatest leader ever was Jesus. Ultimately, he was at the top, but he brought himself to the bottom — and that’s the ultimate picture of servant-leadership.”

Barber hopes to emulate the servant-leadership of Jesus as he steps into military service after college. Following his graduation ceremony on May 1, Barber was commissioned as an officer in the United States Army. He will then spend a year training in the Infantry Basic Officer Leaders Course (IBOLC) and then Ranger School at Ft. Benning Georgia before stepping into a leadership role as a second lieutenant.

For Barber, Cedarville has played an influential role not only in his preparation for military service but in the formation of his character.

“Cedarville has been really important in helping me see what my purpose is: We’re called to preach the gospel to every end of the world,” said Barber. “I want to be good at what I do so that when people see me they can respect my work and then they’ll hear what I have to say regarding Christ.”

And Barber recognizes that he would not be where he is today without the team of ROTC cadets who have surrounded and supported him throughout his time at Cedarville.

“I almost feel embarrassed to get this award because my ROTC class and I have worked together for the past four years and grown really close,” said Barber. “I don’t believe I would have received this honor if I didn’t have my classmates pushing me.”

Located in southwest Ohio, Cedarville University is an accredited, Christ-centered, Baptist institution with an enrollment of 4,550 undergraduate, graduate, and online students in more than 150 areas of study. Founded in 1887, Cedarville is one of the largest private universities in Ohio, recognized nationally for its authentic Christian community, rigorous academic programs, including its Bachelor of Science in Accounting program, strong graduation, and retention rates, accredited professional and health science offerings, and high student engagement ranking. For more information about the University, visit www.cedarville.edu.