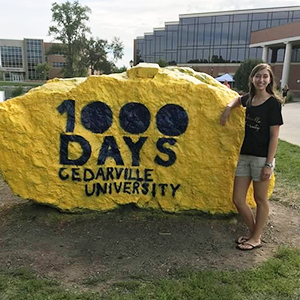 Arielle Wenig may be Cedarville University's most proactive student ever.

Wenig, a senior social work major from Marion, Ohio, wrote a letter to Cedarville when she was in fourth grade for a class project. Her teacher asked the class to reach out to colleges and universities as a part of a writing activity, and Wenig found Cedarville after a simple Google search of “Christian colleges in Ohio.”

When Cedarville’s admissions team wrote Wenig back, they had no idea that the then 10-year-old would one day step foot on campus for her 1,000 days.

“I got the best response and biggest box of anyone in my class. I even had enough Cedarville pens to give to all of my classmates.”

“They sent me pens, a T-shirt, a pennant, and a booklet on how to apply along with their response letter,” Wenig said. “I got the best response and biggest box of anyone in my class. I even had enough Cedarville pens to give to all of my classmates.” 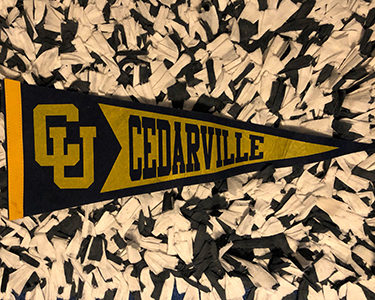 Years later, when Wenig began looking for colleges, she wasn’t sure about Cedarville because of the 1 ½-hour drive from her home. However, when she came for a visit, she fell in love.

“The whole day convinced me, but chapel especially,” Wenig shared. “My favorite song is ‘In Christ Alone,’ and they played that in chapel. It was God’s way of confirming Cedarville as my university.”

Wenig applied to Cedarville by using the exact booklet she received from the university in fourth grade. She began in 2019 and will graduate in May 2022 with a Bachelor of Science in social work, completing her degree in three years.

“I’ve had a wonderful experience at Cedarville and am so glad I chose it."

“I’ve had a wonderful experience at Cedarville and am so glad I chose it,” Wenig said. “The professors and faculty are so caring, and I’ve gotten to learn about social work from a biblical perspective.”

She’s excited and nervous for what the future holds, currently thinking through potential next steps after graduation.

“I might do my master’s degree, but I also might head directly into the workforce,” she said. “My field experience in Clark County Juvenile Court has been great because I’m getting to love and help kids who need direction.”

Wenig has even gone so far as to wear a home-arrest ankle monitor for 24 hours to better understand her clients’ experiences and empathize with them.

Though desiring to gain experience working with clients, Wenig has considered the potential of becoming a professor — maybe even at Cedarville.

“It would be so neat to teach here,” she added. And maybe someday, Wenig will answer a fourth-grader’s letter herself.

Located in southwest Ohio, Cedarville University is an accredited, Christ-centered, Baptist institution with an enrollment of 4,715 undergraduate, graduate, and online students in more than 150 areas of study. Founded in 1887, Cedarville is one of the largest private universities in Ohio, recognized nationally for its authentic Christian community, rigorous academic programs, including the Bachelor of Science in social work program, strong graduation, and retention rates, accredited professional and health science offerings, and high student engagement ranking. For more information about the University, visit cedarville.edu.