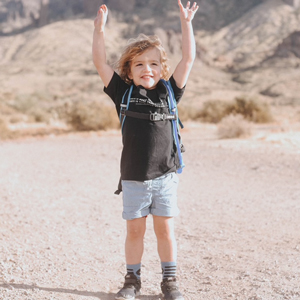 Faro wore this motivational statement on his suit and lived it out in his heart during this past Sunday’s Ironman Tulsa triathlon. His 5-year-old friend Fritz Krieger, who is battling Duchenne muscular dystrophy (DMD), embodies what has become Faro’s battle cry.

Faro finished his first Ironman in 11 hours, 7 minutes and 53 seconds, coming in 248th overall among 1,709 participants.

Ironman is a test of grit and endurance as much as athleticism. Yesterday, May 23, at 6:40 a.m., competitors began diving into Keystone Lake in Sand Springs, Oklahoma, for a 2.4-mile wake-up swim in open water. Next, they traveled 112 miles on bike, just a hair more than the distance between Columbus and Cincinnati, Ohio. Then they finished with a refreshing jog of a mere 26.2 miles. 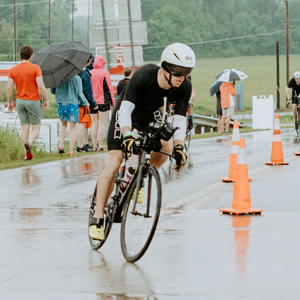 Who voluntarily puts themselves through that kind of repeated, extreme muscle strain and pain? Faro said competing in the Ironman has always been a “bucket list” item for a guy who likes to find ways to keep his competitive juices flowing. But his friendship with Fritz and his parents, Bryant and Sarah, with whom his wife played soccer at Concordia University in Nebraska, upped the ante.

“Strength is so defined by what we can do muscularly,” Faro explained. “Hearing that news and finding out about their son, Bryant and Sarah were in such a dark place. Yet they found so much strength in things that had nothing to do with muscle: a conversation with a friend, a hot meal, a hug. They have taken it upon themselves to inspire others to see strength as more than muscle and be strong in their own way.”

Faro wore the inspirational catchphrase “Strength Is More Than Muscle” as well as the URL for the Kriegers’ nonprofit, fritzandfriendsdmd.org, on the back of his triathlon outfit. On the front of the suit were illustrations of missing chromosomes from Fritz’s DNA, which is the root cause of his disease.

“There are so many who do not have the opportunity to push their bodies the way I’ve been able to push mine. They aren’t able to run, bike or swim. I really try to value that and share the true joy I have in Christ." 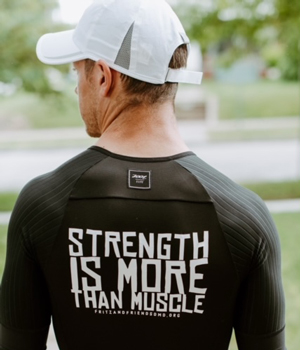 According to the Muscular Dystrophy Association, roughly six out of every 100,000 people are diagnosed with DMD. Until recently, boys with DMD typically lived into their teen years, but with recent advances in cardiac and respiratory care, life expectancy has increased into their 30s.

For Faro, swimming/biking/running with a purpose also includes the leadership role he plays in the lives of the young men he coaches.

“I’ve always believed that you don’t ask of your players what you’re not willing to do yourself,” he shared during an interview on the road. “The things I ask of them – sacrifice, discipline, commitment, honoring and glorifying the Lord with their athletic abilities – this is an opportunity for me to put those things in practice, that I’m willing to do them too. As a coach and someone demanding these things from my guys, I’m going to go first and lead by example.”

And going first has not been easy. Faro began this journey to Tulsa last year in the middle of COVID. Going for a run one day, he realized he was not in the kind of physical condition to which he was accustomed. “I told Shelley when I got back, ‘I’m getting back in shape.’” he said.

“The Lord has given us our bodies and our gifts and abilities. How do I pursue a challenge like this in a way that’s honoring and glorifying to Him?"

“I figured I’ll never have more time to train than right now. I couldn’t go to work; I was stuck at home. There were so many things out of control, but this was something I could push through and not worry about getting shut down.”

He began his training in earnest at the end of last summer, competing in a Half Ironman last fall in Arizona. Leading up to the May 23 event in Tulsa, Faro estimated he was getting in two to three rides, swims, and runs each week, averaging anywhere between 10-12 hours of working out. Near the end of training, he was up to 16 hours a week. That included lots of 5 to 6 a.m. start times so he could be available as a dad, husband, and coach the rest of each day.

While training this year, Faro was derailed by the very virus that began his trek to Tulsa. He was sick with COVID for two weeks and wondered how much conditioning he might lose. But he recovered and was able to stay on track.

“It’s been an adventure,” he said. “Shelley is ready for this to be completed, but she’s also been on board and very supportive. It’s meant extra time for her with our 2 1/2 -year-old, Lincoln, but she’s been really great about it. She’s come out on a bike with Lincoln in a trailer to support me on runs.”

If his competitive drive was the catalyst, his family the support, and Fritz the inspiration, then a muscular faith has provided the power to persevere. “The Lord has given us our bodies and our gifts and abilities,” he offered. “How do I pursue a challenge like this in a way that’s honoring and glorifying to Him? How can something like this inspire and encourage others to become the best version of themselves, which ultimately is becoming more and more like Him in whose image we are created? One of the best ways is to pour everything I have into it so that He is glorified.”

“There are so many who do not have the opportunity to push their bodies the way I’ve been able to push mine,” he continued, reflecting on Fritz. “They aren’t able to run, bike or swim. I really try to value that and share the true joy I have in Christ. God has blessed me with athletic ability, endurance, strength, and legs that work.”

And for Fritz and his family, that’s the kind of perspective that makes their friend Brett a true Ironman.