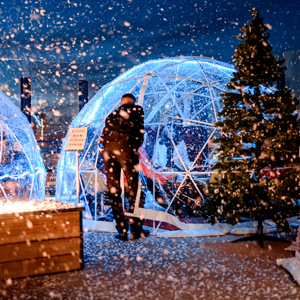 The photography and videography of a Cedarville University alumnus were featured on “Good Morning America” this spring as part of its COVID-19 coverage.

David Ward, a 2019 Cedarville grad, captured the images for 8Up, a rooftop restaurant in Louisville, Kentucky. The small business attracted media attention for its innovative approach to socially distanced dining pop-up igloos.

“It was really cool to see my name and my work on a national broadcast,” said Ward.

Ward was connected to 8Up through Dustin Stutzman, a member of his church who works as the area director of sales and marketing for First Hospitality in the Louisville region.

“If I can capture something so well that somebody feels like they’re falling into it like they’re there, and it can be a faithful representation of what God has created, then that’s wonderful. I think that’s a gift from God."-David Ward

When Stutzman mentioned Ward to the business owners, he was commissioned to capture images for 8Up, the Hilton Garden Inn that sits below it, and The Henry Clay, an affiliated event venue.

While studying communication at Cedarville, Ward worked as a student photographer for Creative Services, a department within the marketing and communications division. He covered sports and campus events, including chapel, and captured general content for the university.

“Being in a position of doing school and having a busy schedule, but also being purposeful about capturing content and then holding true to a promise of delivering that content at a certain time prepared me for what I’m doing now,” said Ward.

After working for Southern Baptist Theological Seminary, Ward recently began a new role as photographer and videographer with Highlands Latin School, a K-12 private, classical, Christian school, and Memoria Press, both in Louisville. He also provides photography services for events, such as weddings, and for commercial businesses.

But photography is more than a hobby or a career path for him. It is a passion.

“If I can capture something so well that somebody feels like they’re falling into it like they’re there, and it can be a faithful representation of what God has created, then that’s wonderful. I think that’s a gift from God,” said Ward. “My photography is just a medium through which someone can experience God’s glory.”

Located in southwest Ohio, Cedarville University is an accredited, Christ-centered, Baptist institution with an enrollment of 4,550 undergraduate, graduate, and online students in more than 150 areas of study. Founded in 1887, Cedarville is one of the largest private universities in Ohio, recognized nationally for its authentic Christian community, rigorous academic programs, including its Bachelor of Arts in Communication program, strong graduation, and retention rates, accredited professional and health science offerings, and high student engagement ranking. For more information about the University, visit www.cedarville.edu.