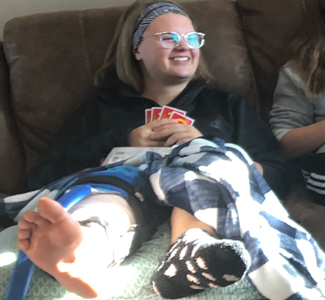 For the second year in a row, junior Alina Sanders is spending her Christmas break recovering from a major injury — talk about a bad break over break, again.

Sanders, a worship major from Brookville, Indiana, is no stranger to injuries. In her 20 years of life, she’s racked up seven concussions, two broken wrists, a third-degree sprained ankle, a broken growth plate, a dislocated shoulder, rib fractures, a torn diaphragmatic wall, a broken femur, a fractured tibia and a torn ACL.

Of these injuries, the last three occurred on August 31, 2019, during a volleyball game at the Callan Athletic Center during her freshman year at Cedarville University.

“Paul deeply loved the Lord, and yet he had a thorn on earth. So even if I still have a thorn, it’s just for now, and I trust God with it.”

“I lunged for the ball, but my leg didn’t really lunge with me,” Sanders shared. “It went behind me, twisted, hyperextended and made a handful of popping noises.”

When she went in for a doctor’s appointment the following week, it was revealed that she’d torn her anterior cruciate ligament (ACL) and fractured her femur and tibia.

“They couldn’t cast my femur because I had to do physical therapy for my ACL, but I also couldn’t do very much with a broken leg, so it was a lot of patience until surgery,” Sanders shared.

She had the operation on December 5 and spent Christmas break 2019 recovering and working fervently at physical therapy.

“They tell you the earliest people walk after surgery is a month, but I was determined to walk by Christmas, and I did — my first steps post-surgery were on Christmas day,” Sanders noted.

When she returned to campus for spring semester 2020 with a knee brace and many physical therapy appointments, Sanders was progressing quickly in her recovery.

Then, on October 22, 2020, she found herself in need of medical attention again after a car accident.

“A friend and I were stopped at a red light on the way to Beavercreek, and someone going 45 mph rear-ended us,” Sanders said. “My seatbelt didn’t lock out, and I whacked my head on the dash.”

While everyone involved in the accident was alright, Sanders sustained a significant concussion.

“After about two weeks of pretending like I was fine, I went in and failed a concussion test,” Sanders shared. “They referred me to another doctor where I took a more in-depth test, which was scored on a point system. At 10 points, you have a concussion, at 40 you have a severe concussion, and I scored a 90.”

Told by doctors to drop the semester, Sanders decided to take her classes as incompletes and go home. She spent her time sleeping nearly 18 hours a day and praying alongside her family and church for healing.

When she went in for a follow-up appointment on November 19, just two weeks after scoring a 90 on her concussion test, she passed with a score of nine.

“The doctors kept telling me that it doesn’t make any sense how my brain healed so fast, but that I’m all good to go now,” Sanders added.

As she reflects on her second round of bad breaks, Sanders is thankful for the faith lessons she’s learned in the process.

“There are definitely times I struggle with always feeling broken, but God always brings me back to the passage where Paul talks about the thorn in his side,” Sanders shared. “Paul deeply loved the Lord, and yet he had a thorn on earth. So even if I still have a thorn, it’s just for now, and I trust God with it.”

Located in southwest Ohio, Cedarville University is an accredited, Christ-centered, Baptist institution with an enrollment of 4,550 undergraduate, graduate, and online students in more than 150 areas of study. Founded in 1887, Cedarville is recognized nationally for its authentic Christian community, rigorous academic programs, including the Bachelor of Arts in Worship program, strong graduation and retention rates, accredited professional and health science offerings, and high student engagement ranking. For more information about the University, visit www.cedarville.edu.