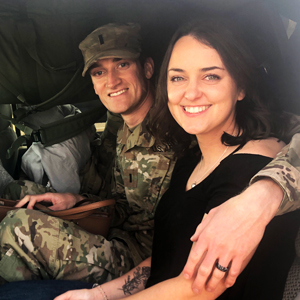 Romantic people often say that absence makes the heart grow fonder. For husband and wife Addison and Mariah Love, 15 months of deployments and thousands of miles of distance made that proverb ring even truer.

Married on November 23, 2019, the Loves spent less than three weeks together before Mariah’s December 2019 deployment to Saudi Arabia. Then, in June 2020, Addison deployed to Europe. After 15 months apart, the two reunited at Fort Campbell, Kentucky, where Addison wrapped up his duties before joining Mariah at Fort Bliss, Texas.

Addison returned stateside on Monday, March 8. He arrived at Fort Campbell to a hero's welcome from his wife, Mariah, and his parents, Dana and Dayna Love, who made the trek to southern Kentucky from their Ohio home.

“It’s sad, but I’ve seen a lot of marriages crumble during deployment. We’ve just taken the approach that divorce isn’t an option. God is so much bigger than us, and our faith fuels that kind of determination.” 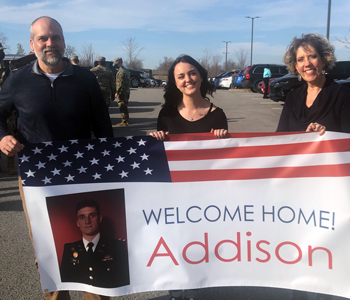 Addison and Mariah met during their time as students at Cedarville University, as both were part of the university’s Army ROTC program. Mariah, formerly from Ypsilanti, Michigan, studied professional writing and information design; Addison, from Springfield, Ohio, pursued a degree in criminal justice.

And, it was Cedarville University, located in southwest Ohio, that connected a Michigander and Ohioan in the fall of 2015.

“My parents went to Cedarville, and I knew it had a good reputation,” Addison noted. “Also, my grandpa had served in the military, and I knew with ROTC I could have that experience.”

But, Mariah’s enrollment at Cedarville was in question just weeks before she committed to the university.

“I was actually about a signature away from enlisting, but everyone I knew in the military said they wished they’d pursued being an officer,” Mariah added. “I trusted them, and when it came down to it, Cedarville was the only school that had all three of my criteria: a Christian worldview, a specific type of writing program, and ROTC.”

The couple met their freshman year through ROTC training and built a friendship. It wasn’t until their senior year that they began dating. Then, when they got engaged in August, they knew right away that they’d be spending their first year of marriage apart.

“The army has the Married Army Couples Program (MACP), which works to station couples together, but we weren’t enrolled in that before our orders were given,” Addison shared. “We knew from the start that we were going to different places.”

With Mariah’s work as an air defense officer taking her to Saudi Arabia and Addison’s eventual deployment to Europe, the two began negotiating this distance with the communication technology available.

“We used FaceTime a lot, trying to call about every other day,” Addison said. “Weekends also became our time for FaceTime dates. We’d turn on movies at the same time and watch them together.”

“Whoever was in the states would try their best to send letters and packages,” Mariah added. “I tried baking Addison cookies one time. They got annihilated in the mail to complete crumbs — but it’s the thought that counts.”

As their time apart wound to a close, the couple anticipated life together again after a year of only text messages and video chats. Though they know that future orders will move them around the country and that deployments may separate them again, they are grateful to be stationed together.

Through it all, the Loves are thankful for the role their faith has played in the maintenance of their marriage.

“You can lean on each other easier knowing that you’re both grounded in the Lord,” Addison said.

“It’s sad, but I’ve seen a lot of marriages crumble during deployment,” Mariah shared. “We’ve just taken the approach that divorce isn’t an option. God is so much bigger than us, and our faith fuels that kind of determination.”

Located in southwest Ohio, Cedarville University is an accredited, Christ-centered, Baptist institution with an enrollment of 4,550 undergraduate, graduate, and online students in more than 150 areas of study. Founded in 1887, Cedarville is one of the largest private universities in Ohio, recognized nationally for its authentic Christian community, rigorous academic programs, including the Bachelor of Arts in Criminal Justice, strong graduation, and retention rates, accredited professional and health science offerings, and high student engagement ranking. For more information about the University, visit www.cedarville.edu.