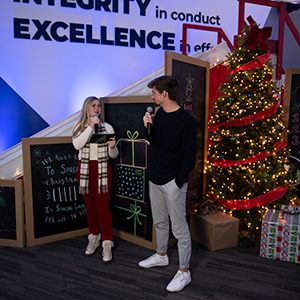 The Cedarville University community, including alumni, parents, faculty, staff, and friends, responded to the national Giving Tuesday campaign earlier this week by contributing $706,507. The money from the Giving Tuesday initiative will be used for projects within the One Thousand Days Transformed campaign, with the majority going to support unrestricted student aid through The Cedarville Fund.

The campaign has already secured commitments totaling more than $98 million.

“The Cedarville community continues to embrace the mission and vision of Cedarville University by contributing financially,” said Will Smallwood, vice president for advancement at Cedarville.

"We are blessed to be entrusted with these resources that transform lives for the Word of God and Testimony of Jesus Christ.”

“To see the wide cross-section from the Cedarville family, including students, parents, and employees, respond with that level of generosity on Giving Tuesday is a testament to God’s grace. We are blessed to be entrusted with these resources that transform lives for the Word of God and Testimony of Jesus Christ.”

More than 500 donors supported Cedarville’s most recent initiative, including 116 first-time contributors. Also, nearly 30 undergraduate and graduate students made a financial gift, and there were 286 gifts from parents, and 264 from alumni. The average alumni gift was $250.

One Thousand Days Transformed: The Campaign for Cedarville was announced Friday, Oct. 1, during the annual State of the University address by president Dr. Thomas White. The announcement of this $125 million comprehensive campaign officially started Cedarville’s homecoming activities.

The campus buildings in the campaign project list include the Scharnberg Business Center, a welcome center and academic facility, the Callan Athletic and Academic Expansion, and a new residence hall for women students.

“The One Thousand Days Transformed campaign will enable Cedarville to equip students for career success and lifelong impact for the Gospel,” noted White. “We are grateful for the support this campaign has already received from friends and family of the university, and we give thanks to God for the privilege of stewarding the resources He has so graciously provided.”

While Cedarville has conducted campaigns in previous years, this is the largest campaign in university history — almost six times larger than the $22 million campaign in 2010 — and its first comprehensive campaign.