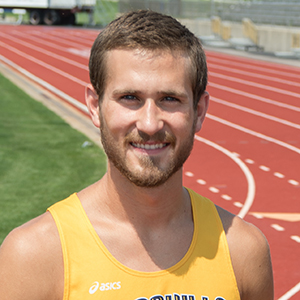 Daniel Michalski had a stellar career as a Yellow Jacket, capping his Cedarville athletics experience with an NCAA Division II national title in the steeplechase in 2017. Many would have been satisfied, but Dan sensed there were other challenges for him yet to jump, hurdle, and climb.

Daniel had one year remaining of college eligibility when he graduated from Cedarville in 2018. He enrolled at Indiana University as a graduate student and continued his outstanding run in cross country and track & field, this time at the NCAA Division I level. He finished just 3/10 of a second behind Minnesota’s Obsa Ali to capture runner-up honors in the 3000M steeplechase at the Big 10 Championships in 2019.

And if not for tripping up on a barrier, Dan may have brought home his second national title in steeplechase. Despite the tumble, Daniel had an All-American finish and came in seventh at the NCAA Division I Men’s Outdoor Track & Field Championships.

“As a son, a brother, now a husband and dad, and ultimately as a child of God, there is so much more to this story than one race.”

This year, Daniel has continued to rise in the event he loves. At one point this spring, he owned the top American time in the steeplechase and had the third-best time in the world. Next Monday, June 21, he will compete at the U.S. Olympic Team steeplechase prelims for a chance to represent the Red, White, and Blue in Tokyo this summer. If he makes it, he will be the first Yellow Jacket to compete on the Olympic stage.

With all of Daniel’s impressive athletic successes, he remains humble and grounded by his faith and his newfound roles as a husband to Abby, dad to Daley, and a college cross country and track & field coach.

“I’m not just a runner,” he shares during the podcast. “As a son, a brother, now a husband and dad, and ultimately as a child of God, there is so much more to this story than one race.”

For more Cedarville Stories podcasts, click on the link below:

Daniel broke a 44-year-old record at the Drake Relays in April this year, claiming the steeplechase crown in 8:29:83. He also won the Penn Relays in 2021, becoming only the second male athlete to win both in the same year.