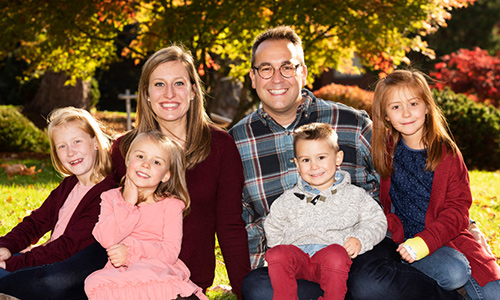 2004 alumnus Philip Miller is faithful. But he’s the first one to admit he’s also been reluctant. In the end, his pursuit of the Lord over being sidetracked by any doubts has led him into great opportunities to serve.

Philip was installed as senior pastor at The Moody Church in downtown Chicago in July 2020. He is now part of a long line of faithful men of God who have served at this signature evangelical church.

As a young man, Philip was not inclined to a life in ministry. His grandfather’s experience caused him to pause at the thought of church leadership.

“This is God’s story. He is the author and perfecter of our lives and histories."

In spite of his fears, the Lord’s urgings won out and Philip pursued his calling while an undergraduate at Cedarville. The Lord also provided him a strong helper in His service by leading Philip to his wife, Krista, who is a 2004 alumna.

After Cedarville, Philip pursued further training at Dallas Theological Seminary. He was ordained at Stonebriar Community Church in Frisco, Texas, in 2010, and from 2013 to 2020, he served at Westwood Baptist Church in Olympia, Washington.

“This is God’s story,” Philip shared with Cedarville public relations in 2020. “He is the author and perfecter of our lives and histories. We’re just looking forward to the adventure!”

Philip is following in the footsteps of well-known figures in the American church, including long-time Cedarville friend Dr. Warren Wiersbe, whose personal library is housed in the Warren and Betty Wiersbe Library and Reading Room at the Center for Biblical and Theological Studies.

Located in southwest Ohio, Cedarville University is an accredited, Christ-centered, Baptist institution with an enrollment of 4,715 undergraduate, graduate, and online students in more than 150 areas of study. Founded in 1887, Cedarville is one of the largest private universities in Ohio, recognized nationally for its authentic Christian community, rigorous academic programs, including the Master of Divinity program, strong graduation and retention rates, accredited professional and health science offerings, and high student engagement ranking. For more information about the University, visit cedarville.edu.