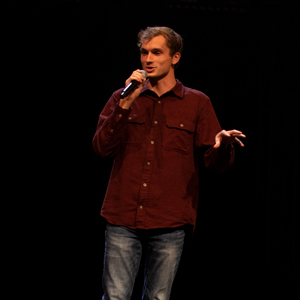 Jake Johnson has been blessed with a gift: knowing what he doesn’t know. Then he seeks out those who have gone before him to learn the wisdom he hopes to apply in his life.

For the past year, Jake has served as president of the Student Government Association. He has learned to slow down, ask questions, and listen well. He’s also sought the godly insight of campus mentors he hopes to emulate.

Jake has also been blessed with incredible opportunities to learn from people he admires, including an internship in the office of Mike Pence, the former vice president of the United States. After graduation in a few weeks, he will return to Washington, D.C., to work as a staff assistant for U.S. Senator Jim Inhofe from Oklahoma.

“God has used people at Cedarville, people who are way further down the line than me in their walks with the Lord."

As Jake approaches graduation, he is reflecting on the people at Cedarville who helped him begin this amazing journey.

“God has used people at Cedarville, people who are way further down the line than me in their walks with the Lord,” he says in the podcast. “It’s just such a unique place, where there are so many people running after the Lord. I’m so grateful for the people at Cedarville.”

Jake also served with the team that welcomed students back to campus last August during the “touchless” Getting Started Weekend.

Located in southwest Ohio, Cedarville University is an accredited, Christ-centered, Baptist institution with an enrollment of 4,550 undergraduate, graduate, and online students in more than 150 areas of study. Founded in 1887, Cedarville is one of the largest private universities in Ohio, recognized nationally for its authentic Christian community, rigorous academic programs, strong graduation and retention rates, accredited professional and health science offerings, and high student engagement ranking. For more information about the University, visit cedarville.edu.