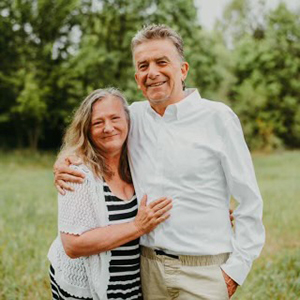 Life can be messy. 1978 graduate Ken Erny knows that firsthand.

Ken first learned the messiness of life as a member of the men’s tennis team. He withstood snow, rain, and 70-mile-per-hour winds, but finished his match. Or the time he broke his wrist on his way to another match, which ended his chance to play at the NAIA national tournament.

Then men’s coach Murray Murdoch, (who also happens to be a Distinguished Professor of History and Government) drove Ken to the hospital in the early morning hours for medical care. Then he took him out to breakfast afterward.

Those earliest experiences prepared Ken for embracing fresh unknown challenges, starting two brand-new soccer programs at high schools in Michigan. By 2020, Ken was looking ahead to retirement as he prepared his successor.

"Life is messy, and yet we have a God who says He will come right alongside you." 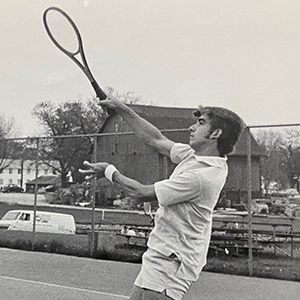 But that does not mean that Ken, who was serving as athletic director in Fruitport, Michigan, was slowing down at all. Sixty-to-seventy-hour work weeks were still common. And then came COVID-19, which brought Ken, and the rest of the world, to a hard stop.

During the quiet of the pandemic, Ken was able to pay attention to a little problem with his foot that he had brushed off during the busyness. The fact was his leg and foot were not working exactly right. Maybe it was a back problem? The doctor’s diagnosis revealed something far more devastating: Ken had contracted amyotrophic lateral sclerosis, or ALS, also known as Lou Gehrig’s disease. ALS is a progressive neurodegenerative disease, and there is no cure.

Ken and his wife, Lori, who have trusted the Lord through the ups and downs of life for 42 years, have embraced this struggle together, surrounded by the love of their supportive family and friends.

Ken regularly records messages for Lori, his kids, grandkids, and other loved ones, more than 100 so far, that will be treasured words or wisdom, grace, and affection when he is no longer able to speak, which is an ALS symptom. And here is one of his greatest bits of wisdom and truth:

“Life is messy, and yet we have a God who says He will come right alongside you,” Ken shares during the podcast. “God promised to join you in the mess. He won’t leave you in spite of anything, and the future is so much better compared to what we’re going through now.”

Ken received a surprise visit on the podcast from his beloved professor and coach, Murray Murdoch.