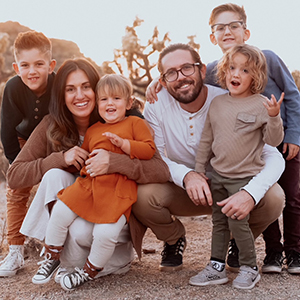 Brett Faro knows something about muscle. As a former college soccer player, Cedarville’s men’s soccer coach, and now an Ironman triathlete, he knows how muscle is linked to strength and strength is linked to success. But in his latest journey, his view of strength, like his muscles, has been stretched.

This May, Brett competed in the Tulsa Ironman triathlon, a grueling 140.6-mile swim/bike/run. But for Brett, this became more than an athletic milestone to reach. Led by his faith and his relationship with the Krieger family of Mesa, Arizona, Brett wanted to bring attention to the disease that Bryant and Sarah Krieger’s son, Fritz, was battling – Duchenne muscular dystrophy (DMD).

“There are so many who do not have the opportunity to push their bodies the way I’ve been able to push mine. They aren’t able to run, bike, or swim."

DMD typically claims the lives of those who contract it by their teens to mid-20s, although recent medical advances have increased life expectancy.

Brett wore the phrase “Strength Is More Than Muscle” on his racing outfit. This is also the tagline for the Kriegers’ nonprofit, Fritz and Friends. Their website, fritzandfriendsdmd.org, was also emblazoned on the back. When he spoke to media after the race, Brett took the opportunity to share about Fritz and how people across the country can join the fight against DMD.

“God has blessed me with athletic ability, endurance, strength, and legs that work,” he said in an interview with Cedarville public relations prior to the Ironman contest. “There are so many who do not have the opportunity to push their bodies the way I’ve been able to push mine. They aren’t able to run, bike, or swim. I really try to value that and share the true joy I have in Christ.”

You too can join the fight against Duchenne muscular dystrophy by visiting fritzandfriendsdmd.org.

Located in southwest Ohio, Cedarville University is an accredited, Christ-centered, Baptist institution with an enrollment of 4,550 undergraduate, graduate, and online students in more than 150 areas of study. Founded in 1887, Cedarville is one of the largest private universities in Ohio, recognized nationally for its authentic Christian community, rigorous academic programs, and retention rates, accredited professional and health science offerings, and high student engagement ranking. For more information about the University, visit cedarville.edu.