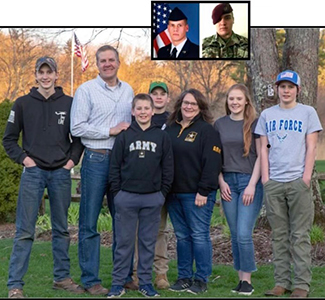 Captain Seth Johnson switched from pulpit ministry, where he had served 20 years, to chaplaincy in the Connecticut Air National Guard. That's a big shift so deep in one’s career, right? Seth sees it as the same call, just a change of uniform.

Seth, a 1996 Cedarville alumnus, joined the Connecticut Air National Guard where his brother-in-law and one son were serving. Another son is a medic in the U.S. Army. Because of his academic and ministry experience, he was commissioned directly as a captain.

This shift to the military has been a return to Seth’s roots. His ministry life began as a youth pastor at a church in Beavercreek, Ohio, near Wright-Patterson Air Force Base. The unique stresses and challenges of military life were a part of his first-time ministry experiences.

"The Bible says be ready in season and out of season, always ready to give an answer of the hope that is within you."

As a chaplain in the Air National Guard, Seth is a trusted release valve for airmen and those in command. Serving in the church prepared him well to be that calm and even presence for those facing difficulties and hardships. In the guard, he is available to everyone on base, regardless of their religious beliefs.

"The Bible says be ready in season and out of season, always ready to give an answer of the hope that is within you,” Seth explained to Cedarville Public Relations earlier this year. “It’s kind of bearing the fruit of the instructions of Scripture.”

Seth is grateful to his Cedarville professors and Jeff Beste, Director of Strategic Relations, for their influence on him during his transformative 1,000 days at Cedarville.