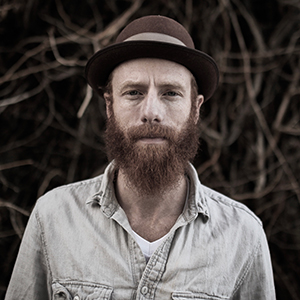 Dove Award-nominated singer-songwriter Matt Papa will serve as artist-in-residence at Cedarville University for the 2021-22 academic year.

“In Matt Papa, we have found a kindred spirit for our worship program and for our campus community,” White said. “His modern hymns uplift and inspire the church, and he has a passion to invest in students and encourage them to use their God-given abilities to do the same. We are blessed to have him as an artist-in-residence at Cedarville this year.”

Papa is a 16-year veteran of the Christian music industry.

"I just really enjoy investing in younger songwriters and seeing the lightbulbs go on.”

Having an artist-in-residence has been a hope and goal of the Cedarville worship program for the last six to seven years, according to Dr. Roger O’Neel, associate professor of music and worship.

“It’s really the fulfillment of a dream,” O’Neel said. “We’ve desired to have people in the industry who can help our students, who can help promote Cedarville University and who can be ambassadors for us in the music industry.”

While the official relationship between Papa and the university was formalized earlier this summer, the process began two years ago, when Papa opened for Keith and Kristyn Getty at Cedarville.

“Our students were able to meet him at that time, and they related to him well, and we saw that Matt was someone we would enjoy working with,” O’Neel said. “We began the conversation then. We are glad to have this relationship with him for this school year.”

Papa will serve in a variety of roles as artist-in-residence, which begins August 25, when he performs and speaks at Cedarville’s daily chapel at 10 a.m. in the Jeremiah Chapel.

He will also guest lecture in two worship major classes this fall and the Worship Songwriting class in the spring, which is part of the new songwriting minor; perform and lead worship as the featured performer during the Worship 4:24 conference on January 28-29, 2022; perform in concert with Cedarville musicians on Saturday, October 2 at 7 p.m. in the Jeremiah Chapel as part of Homecoming; and conduct a one-day songwriting seminar open to the public on March 19, 2022.

He will also promote the university on his website, at conferences and concerts, and informally as he speaks to prospective college students who are considering a worship major or who are looking for a Christian university. “I think this is a win-win-win,” said O’Neel. “We have things happening on campus; we have great programs; and with people like Matt on campus, it’s going to help us.”

For Papa, this is a unique opportunity to combine two of his loves – songwriting and supporting aspiring professional songwriters and performers.

“Usually what happens is you’re either doing or teaching in terms of your career,” Papa said. “But I get to do both, performing and singing and having the opportunity to unpack the philosophy of what I do. I just really enjoy investing in younger songwriters and seeing the lightbulbs go on.”

He also looks forward to drawing students to Cedarville who are intrigued by a career in music. “I want to give them a horizon to chase after and get them excited about what their future could be,” he shared. “Later on, as they get into their careers and become professionals, there could be collaboration. I see a lot of benefits to this.”

As he reflected on this coming year at Cedarville, Papa reminisced about his own creative path.

“In my early 20s, I started going to songwriting retreats and hear experienced songwriters do a teaching session, and then you’d break up in groups and share songs,” he related. “Those were times when I was really alive and growing as a songwriter. I hope to do that for students at Cedarville too, to give them some of the same kinds of experiences and hopefully set them on a path toward a career in songwriting.”

Located in southwest Ohio, Cedarville University is an accredited, Christ-centered, Baptist institution with an enrollment of 4,550 undergraduate, graduate, and online students in more than 150 areas of study. Founded in 1887, Cedarville is one of the largest private universities in Ohio, recognized nationally for its authentic Christian community, rigorous academic programs, including the Bachelor of Arts in Worship, the Master of Arts in Worship and Theology, and the Graduate Certificate in Worship Leadership programs, strong graduation, and retention rates, accredited professional and health science offerings, and high student engagement ranking. For more information about the University, visit cedarville.edu.