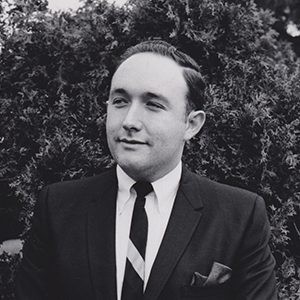 In 1965, “A Charlie Brown Christmas” debuted on network TV, becoming a holiday classic; the Gateway Arch in St. Louis was completed; the Voting Rights Act of 1965 was signed into law by President Lyndon B. Johnson; and Dr. J. Murray Murdoch, distinguished professor of history and government, began his long and impactful career at Cedarville University.

Murdoch recently announced his retirement after 56 years of service at the university. Cedarville honored him and his wife, Ruth, during the university’s daily chapel service on Thursday, Nov. 18. The recording of the special chapel can be viewed at cedarville.edu/chapel.

The November 18 chapel hour was devoted to Murdoch, with special messages from former students, faculty colleagues, and friends honoring his legacy and recalling his influence on their lives.

Murdoch is a stalwart of biblical integration and has been a strong voice for making sure that all courses across university disciplines reflect a biblical worldview.

During the service, a proclamation from Ohio Gov. Mike DeWine was read by Cedarville President Dr. Thomas White and presented to Murdoch, recognizing his remarkable career.

Murdoch earned his doctoral degree in American history from Northwestern University. He served as chair of Cedarville’s history department and is well known on campus for his course on social movements, reflecting his “lifelong desire that peoples of all races find an open and loving reception in Bible-believing institutions.”

Murdoch is a stalwart of biblical integration and has been a strong voice for making sure that all courses across university disciplines reflect a biblical worldview.

Beyond teaching history, Murdoch is an author, having penned “Portrait of Obedience: The Biography of Robert T. Ketcham” and the 100-year history of then Cedarville College.

He also made history as Cedarville’s men’s tennis coach. Murdoch’s teams recorded 563 wins during a stellar 29-year career, including 88 consecutive dual-match victories, both records at the university. Under his leadership, Cedarville’s men’s team claimed 23 National Association of Intercollegiate Athletics (NAIA) District titles and 23 Mid-Ohio conference championships. In 1989, his team finished eighth at the NAIA national tournament.

Murdoch has been married to his wife, Ruth Mary Murdoch, for 63 years. They have two sons and a daughter-in-law: Jim ’87 and Jessica and Mark ’91; and five grandchildren, Thomas, Campion, Emma, Cyprian and James.

Located in southwest Ohio, Cedarville University is an accredited, Christ-centered, Baptist institution with an enrollment of 4,715 undergraduate, graduate, and online students in more than 150 areas of study. Founded in 1887, Cedarville is one of the largest private universities in Ohio, recognized nationally for its authentic Christian community, rigorous academic programs, including the Bachelor of Arts in history program, strong graduation, and retention rates, accredited professional and health science offerings, and high student engagement ranking. For more information about the University, visit cedarville.edu.