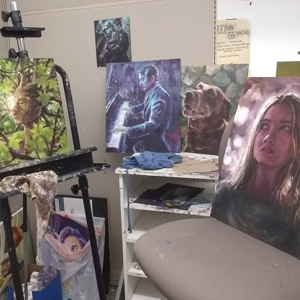 For Cedarville University senior studio art major Anastasia Bisel, her “wild, fantastic” dreams of dragons, coupled with her faith and creativity, have sparked her life’s passions and interests that she has woven into her art and writing.

“Heart of Aegia: The Hunt for the Gold Wing” is the first of her four-part novel series about several characters in a fantasy world who uncover the true history of a war between the races that was hidden by centuries of propaganda. While only a fraction of the story is about dragons, Bisel’s fascination with the mythical creatures sets the story in motion.

“The novel began with a world and a story that I stitched together from some dreams I had,” Bisel said. While she has had her share of imaginative dreams, only a few have featured dragons. “These dreams were significant to me, and the dragons in my book are entirely based on the creatures that I met while I was sleeping,” she said.

“My parents noticed my creative tendencies early on and made sure to nurture and encourage it, so there has never been a point where I wasn’t using art to express my interests.” 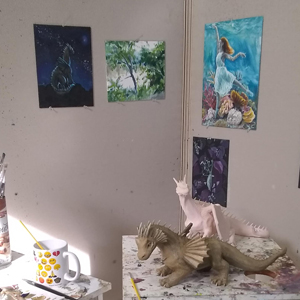 Having written the first draft at age 13, Bisel returned to the story several years later. The series has become a saga chronicling the interactions between characters from vastly different cultures, races, ages, and statuses.

“I’ve considered myself an artist for as long as I can remember,” Bisel said. “My parents noticed my creative tendencies early on and made sure to nurture and encourage it, so there has never been a point where I wasn’t using art to express my interests.”

While she has always possessed a love for learning and creating, Bisel fosters a unique interest in dragons, leading her to include them in her novel, sculptures, and other artistic work.

To Bisel, dragons came to be a symbol of her God-given creativity. “As an image-bearer of our creative God, I take great joy in mimicking his process of creating by using the gifts I’ve been given to make something new,” she said.

Besides the book series, Bisel has built a clientele for her art through connections among friends and family. A recent client was a man from her home church who wanted a portrait painted of his girlfriend’s dog who had tragically drowned.

“I did my best to be sympathetic in our interactions and painted a portrait that could faithfully capture the likeness of their pet so that it could help them during their grieving,” Bisel said.

One of her favorite human portrait commissions was for her sister’s grandma-in-law, who was getting married later in life and wanted a portrait drawn. “The couple looked so sweet and fun-loving, and I hope I was able to project that back to them so they could see it.” Bisel focused on portraying the couple’s lively faces and personalities.

Bisel has also published several coloring books and will continue to explore new art mediums, looking forward to how God will use her passions in the coming years.

“I feel like I’m at a stage where I have been preparing my skills for future use, and sometimes I have to fight my own restlessness and know that the time will come,” said Bisel. “But I am also aware that perhaps some of these precious moments are already beginning with the clients I have now. I tell myself that maybe I’ll never know exactly what God is doing through me, but if I am faithful to put my brush against the canvas, he can make someone else see what they need to see.”

Located in southwest Ohio, Cedarville University is an accredited, Christ-centered, Baptist institution with an enrollment of 4,550 undergraduate, graduate, and online students in more than 150 areas of study. Founded in 1887, Cedarville is recognized nationally for its authentic Christian community, rigorous academic programs, including its Bachelor of Arts in Studio Art program, strong graduation, and retention rates, accredited professional and health science offerings, and high student engagement ranking. For more information about the University, visit cedarville.edu.