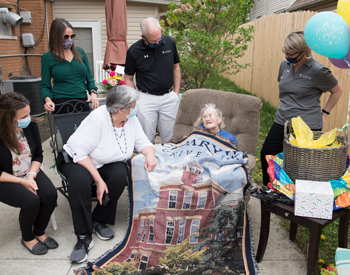 Ten years before she was born, the Wright Brothers made their first flights at Kitty Hawk, North Carolina. The year of her birth, 1913, the city of Dayton, Ohio, suffered a devastating flood. And when she was 5 years old, the country was in the grip of a different pandemic, the Spanish Flu.

Geraldine Henry has seen and survived a lot.

Cedarville University, where she graduated in 1934 (then called Cedarville College) with a degree in education, celebrated her 108th birthday on April 28 at Sisters on Elm Assisted Living Center, 76 Elm St., London, Ohio.

“Geraldine is our oldest living alumnus, and she holds an honored position at the university."

Henry is believed to be the oldest of Cedarville’s alumni. She is the only child of William and Cora Henry and lived in her family home in London, Ohio, until 2014, when she moved to Sisters on Elm. 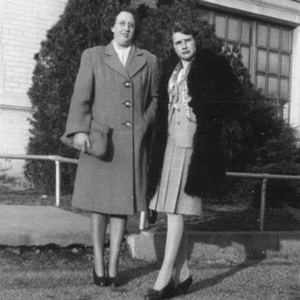 To honor Henry, Cedarville delivered more than 108 birthday cards from current faculty, staff, and students to her on April 28, along with gifts and balloons.

Roscoe Smith, Cedarville’s director of gift planning, noticed in January that Geraldine’s birthday was coming up soon. “What can do you for somebody her age?” he shared. “We won’t be able to take her anywhere, and I’m not even sure we will be able to see her. I thought, ‘Let’s overwhelm her with love through cards.’”

Smith reached out to Cedarville school of education dean Dr. Kevin Jones and explained his plan. “He agreed immediately and was very excited about helping out with that kind of a project,” he said. 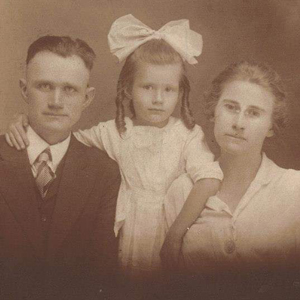 Smith started with 100 birthday cards dropped off on a Thursday morning. By Friday morning, all the cards had notes and birthday wishes, and the school of education was asking for more.

“The school of education has been great,” Smith said. “Some of the faculty took the cards to their classrooms and gave their students five minutes to write a note.” Already, he is over his goal of 108 cards.

In addition to being the oldest of Cedarville’s alumni, Henry has been a long-time supporter of the university, establishing an endowed scholarship, the William and Cora Norman Henry Memorial Scholarship, in 1983 to honor her parents. The scholarship is for elementary education majors, and students from Clark County are given first preference.

“Geraldine is our oldest living alumnus, and she holds an honored position at the university,” Smith noted. “She has maintained close ties with Cedarville over the years and has shown a desire to support students today who are pursuing a career she gave her life to. That is worth honoring.”

Located in southwest Ohio, Cedarville University is an accredited, Christ-centered, Baptist institution with an enrollment of 4,550 undergraduate, graduate, and online students in more than 150 areas of study. Founded in 1887, Cedarville is one of the largest private universities in Ohio, recognized nationally for its authentic Christian community, rigorous academic programs, including its Bachelor of Arts in Primary (P-5) Education, strong graduation, and retention rates, accredited professional and health science offerings, and high student engagement ranking. For more information about the University, visit www.cedarville.edu.