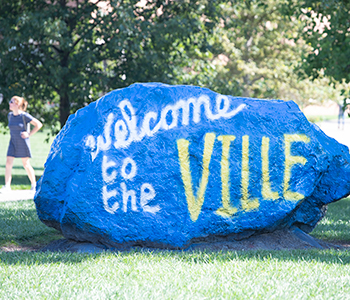 Cedarville University’s Board of Trustees approved the appointment of a new vice president, financial aid for 2021-22, revised academic requirements for the doctor of pharmacy program, 10 new faculty members, and two new trustees at its regular board meeting Thursday, September 30, 2021.

“I have known Dr. Smallwood for many years and have always been struck by his humility, professionalism, and desire to give God the glory."

Smallwood came to Cedarville from Louisiana College, where he served as executive vice president. In this role, he led enrollment management, development, alumni relations, and marketing and communications.

Smallwood joined Cedarville University in April 2021 as associate vice president of development until Melson’s departure in September, when he was named interim vice president.

Prior to joining Louisiana College, Smallwood served as senior vice president for advancement and university relations for Oklahoma Baptist University (OBU) for 10 years. In his decade of service, Smallwood led the advancement team to launch and surpass the five-year $42 million goal for the OBU Vision for a New Century comprehensive campaign more than a year early.

“We are blessed to have Dr. Will Smallwood serving as our vice president for advancement,” said Cedarville president Thomas White. “I have known Dr. Smallwood for many years and have always been struck by his humility, professionalism, and desire to give God the glory. We look forward to all that the Lord will do through him at Cedarville in the years to come.”

Smallwood will be leading the university’s One Thousand Days Transformed: The Campaign for Cedarville, which was announced this past homecoming weekend. The $125 million campaign, of which $95.6 million has already been secured during a two-year quiet phase, will transform the university’s facilities, campus experience, affordability, and long-term sustainability.

Smallwood earned his bachelor's degree in public relations from the University of Florida. He earned a master's degree in theology and a Ph.D. in biblical spirituality and American religious history from Southern Seminary. Additionally, Smallwood holds a Master of Business Administration from Louisiana State University and has completed postgraduate studies in higher education leadership at the University of Massachusetts.

University administration updated the trustees on One Thousand Days Transformed: The Campaign for Cedarville, including announcing the $95,609,432  that has currently been committed by donors during the silent phase of the campaign.

“The One Thousand Days Transformed campaign will enable Cedarville University to equip students from career success and lifelong impact for the Gospel,” said White. "We give thanks to God for the privilege of stewarding the resources he has so graciously provided.”

The One Thousand Days Transformed campaign includes the following initiatives:

Trustees reviewed and approved a financial aid program for fall 2022 new students that includes modest increases to merit-based scholarships. The university continues to focus on affordability with new students this year receiving an average of more than $20,000 in grants and scholarships.

The school of pharmacy’s proposal for addressing prerequisites and corequisites was adjusted to provide greater flexibility to future Pharm.D. applicants to satisfy admission requirements.

Specifically, the trustees provided more clarity to the “minimum of grade of C” requirement for prerequisite courses and provided flexibility for students to repeat courses. Also, the board approved replacing Cell Biology as a prerequisite course with a biology elective for all applicants and will allow for exceptions on an individual basis for prerequisites to be completed prior to the second year of the Pharm.D. program year, so that students can start the program sooner.

The board approved the hiring of 10 faculty members:

Jonathan Burson earned his doctoral degree in business (finance) from Auburn University. He has a master’s degree in military operational art and science from Air University and an MBA from Touro University International. Burson’s undergraduate degree is in computer information systems from Cedarville University. Since 2018, Burson has been an instructor at Auburn University.

Amanda Minor earned her master’s and bachelor’s degrees in nursing from Cedarville University. Since 2016, she has served as a nurse sonographer for the Pregnancy Resource Clinic of Clark County.

Located in southwest Ohio, Cedarville University is an accredited, Christ-centered, Baptist institution with an enrollment of 4,715 undergraduate, graduate, and online students in more than 150 areas of study. Founded in 1887, Cedarville is recognized nationally for its authentic Christian community, rigorous academic programs, strong graduation and retention rates, accredited professional and health science offerings, and high student engagement ranking. For more information about the University, visit www.cedarville.edu.