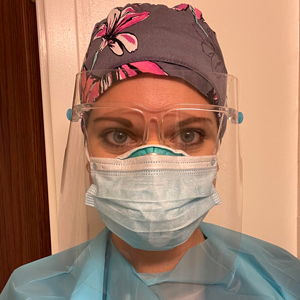 She began in Virginia, sailed to New York, raised the mainsail again for Connecticut, flew to the Virgin Islands, came back to Ohio, and now is in Los Angeles till the end of March. Wherever COVID shows up, Rachel Hartley shows up too, ready to join the fight where the need is greatest.

Hartley, a 2015 B.S.N. and 2020 M.S.N. alumna of Cedarville University, is currently serving in downtown Los Angeles at PIH Good Samaritan Hospital. When she arrived after Christmas, the hospital was in the middle of a coronavirus surge. “Prior to Thanksgiving, they only had a handful of cases,” she said. “Now the majority of the hospital is COVID. There were around 80 patients just in intensive care, and they just opened up another COVID ICU unit.”

According to Hartley, patients come into the hospital already in an advanced stage of the virus and needing an immediate ICU admittance, or they are admitted to a medical/surgical unit.

“I hope the Lord will give me strength with my co-workers who are so exhausted, and who have been doing this for months. And in everything I do, just to point to the Lord and glorify His name."

“They may not need critical care when they first arrive, but a lot of those people do decompensate while they’re in the hospital,” she said. “We see a lot of rapid response and code blue calls. It gets so severe so quickly.”

This is the fifth port of call for Hartley, who began serving at New York University’s Langone Brooklyn Hospital in March 2020 until June. Then it was Yale-New Haven Hospital in New Haven, Connecticut, where she served until October. Next, she served at a hospital on St. Thomas in the U.S. Virgin Islands. She came back in December to Ohio where she fought COVID at Mercy Health - St. Anne Hospital in Toledo.

During her stint in her home state – Hartley grew up in Westerville, Ohio – she and her husband, Taylor, both came down with COVID-19 themselves.

“Thankfully, it was a quick duration for both Taylor and me,” Hartley shared. “I had really minor symptoms, and he was only sick for a day or two. We did have to isolate for two weeks.”

For Hartley, treating patients in LA has been reminiscent of New York, where the devastating death toll required temporary morgues in tractor-trailers in the hospital parking lot.

“We’ve had a lot of patients pass away from the virus in the hospital,” she related. “Just recently, after a patient died and the body was transported to the morgue, a person came back up to the unit and said the morgue was full, and they didn’t know what to do. That definitely had me thinking about New York.”

The patient population is primarily Hispanic, Hartley explained, and her patients have ranged in age from 20 to 90 years old. “There is a large number who have co-morbidities such as obesity, diabetes, or hypotension, but there are still quite a few who have no history at all,” she added.

Hartley plans to serve in LA till the end of March and likely will look for another COVID assignment. Until then, she is seeking help from God about how to be a source of hope and encouragement to her co-workers who are resilient but weary, and to patients and their families who are struggling and scared.

“Yesterday, I was talking to two of my patients’ families, and I could hear how desperate they were and just not understanding that their loved one is dying,” she offered. “It’s really difficult because so many families are not able to be there and see what’s actually going on, other than Facetiming in. As their loved one’s caregiver, I’m giving care to them too and hopefully being able to paint a clear picture of what’s going on and give them hope in such a dark time.

“I hope the Lord will give me strength with my co-workers who are so exhausted, and who have been doing this for months. To be a refreshment is my goal. And in everything I do, just to point to the Lord and glorify His name, to share the Gospel with my co-workers and my patients because Jesus is the only hope that we have or need.”

And as Hartley’s example demonstrates, hope helps a person not just stay in the fight, but continue to pursue the fight. Wherever, whenever, and whatever it takes.

Located in southwest Ohio, Cedarville University is an accredited, Christ-centered, Baptist institution with an enrollment of 4,550 undergraduate, graduate, and online students in more than 150 areas of study. Founded in 1887, Cedarville is one of the largest private universities in Ohio, recognized nationally for its authentic Christian community, rigorous academic programs, including the Bachelor of Science in Nursing program, strong graduation and retention rates, accredited professional and health science offerings, and high student engagement ranking. For more information about the University, visit www.cedarville.edu.