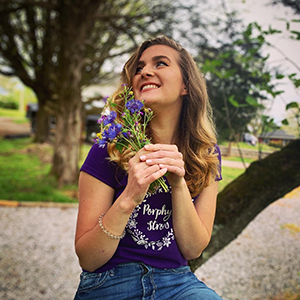 Mary Amalia Sofia, a senior psychology major at Cedarville University, has a rare nervous system disorder whose symptoms are so severe that she had to leave school for the 2020 spring semester. But thanks to her faith and medication, she is on track to complete her degree on time.

On the first day of classes as a freshman at Cedarville, Sofia first experienced symptoms of acute intermittent porphyria (AIP). AIP affects the way Sofia’s liver processes blood, resulting in extreme abdominal pain, nausea, and vomiting. A flare-up is severe and debilitating and sometimes requires hospitalization.

After several weeks, her friends began taking her to local hospitals to discover what was ailing her, but to no avail. Eventually, her parents drove her back to Pennsylvania to visit more doctors.

“God has given me the strength to do things I genuinely never thought possible.”-Mary Amalia Sofia

“Doctors thought I was crazy,” Sofia said. “They didn’t believe my symptoms, considered me a drug addict, or were convinced I had an eating disorder. No one knew what was happening.”

Eventually, Sofia was diagnosed with AIP after physicians analyzed her medical history. Unknown to Sofia, her grandmother also had this rare condition that afflicts fewer than 200,000 people in the United States, according to the American Porphyria Foundation.

Since there wasn’t much information about AIP,  Sofia figured it must not be that significant of a condition. Surely, it wouldn’t impact her life that much. “I was very naive,” Sofia said. “I thought I could just return to school and this would never affect me again.”

She returned for the remainder of freshman year with most of her major attacks happening over breaks, giving her a false assurance that this condition wouldn’t impact her normal functioning.

Upon returning to Cedarville in the fall of 2019 for her sophomore year, Sofia started having major attacks that hospitalized her every month. After Thanksgiving break, Sofia came to the difficult decision not to return for the spring semester.

“The only way I finished my fall semester was through God’s strength,” said Sofia. “Through this process, I have seen 2 Corinthians 12:9-11, which speaks of God’s strength being made perfect in human weakness, which is very evident in my life.”

After leaving college, Sofia began to feel like she was living Psalm 88, which reads, “But I cry to you for help, Lord; in the morning my prayer comes before you. Why, Lord, do you reject me and hide your face from me? You have taken from me friend and neighbor—darkness is my closest friend.”

“I was in this lost and hopeless spot, which transformed my faith,” she explained. “I had to come to grips with reality. Even if my life was going to be filled with doctor appointments and hospital visits, this is still a life worth living. God had to be enough.”

Sofia’s hospitalizations continued, ranging from three days to more than a week. Unable to keep any type of a consistent schedule, Sofia’s social life became nonexistent, and she searched for any type of work to give her purpose between attacks. This led her to administrative work for her church.

“God uses all of our circumstances; I just needed to be faithful,” said Sofia. “I didn’t always need to be in the best mood, but my overall response needed to be trusting that God is good and there are always ways to bring Him glory.”

Sofia’s condition continued to decline, but there was hope on the horizon.

Sofia started taking medication to help with her API in February 2020. Although she still

experiences tiredness and nausea during the week of the month she’d normally experience an attack, she hasn’t been hospitalized since and returned to Cedarville for the fall semester of 2020. “This year I have seen my education as a pure gift,” she said.

By taking summer classes, Sofia is on track to graduate in May 2022. She also now wants to use her psychology major to become a social worker, helping those who are enduring chronic illness.

“We tend to think that when someone is sick, all they need is a little medicine, which can help to a certain extent,” Sofia explained. “But achieving wellness is multifaceted, including social, psychological, and spiritual aspects as well as physical,” explained Sofia. “God has given me the strength to do things I genuinely never thought possible.”

Located in southwest Ohio, Cedarville University is an accredited, Christ-centered, Baptist institution with an enrollment of 4,550 undergraduate, graduate, and online students in more than 150 areas of study. Founded in 1887, Cedarville is one of the largest private universities in Ohio, recognized nationally for its authentic Christian community, rigorous academic programs, including its Bachelor of Arts in Psychology, strong graduation, and retention rates, accredited professional and health science offerings, and high student engagement ranking. For more information about the University, visit cedarville.edu.