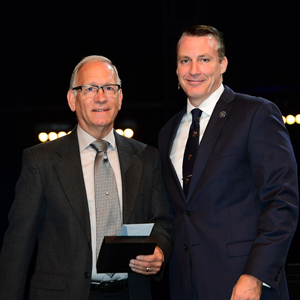 After 38 years, Mark Klimek is leaving his mark on Cedarville University. Although he is retiring from his role as professor, his work to help nursing students succeed won’t stop.

During his time at Cedarville, Klimek became known nationally for his National Council Licensure Examination (NCLEX) review resources. The NCLEX is the national examination for the licensing of nurses in the United States implemented in 1982. “I wanted 100% pass rates for all my students because they were like my family,” Klimek said. “I had a real passion for them to be successful their first time taking the test.”

Klimek started small in 1986 by inviting students to his house for a couple of weeks to review and learn how to take the exam. Within a couple of years, Klimek had 30-40 students wanting to meet with him in larger groups. He started writing materials for students to study, which led to two published books on the subject.

"It is a privilege to call this man my friend and mentor.”

Information about his seminars can be found on his website. Klimek will continue to pour into his business once he retires.

In 1980 and 1981, Klimek participated in Cedarville’s feasibility study to determine the shape and scope of a nursing program. In the fall of 1983, Klimek was hired as one of the first faculty to help create a foundation for that nursing curriculum. He wanted to teach with integrity and incorporate faith within his teaching, and Cedarville was just the place to do that.

He has also contributed to the department by creating curriculum reports for accreditors including the Collegiate Commission on Nursing Education (CCNE) and the Ohio Board of Nursing (OBN). Klimek also received the faculty of the year award in 2017.

Over the years, he has touched the lives of faculty and students alike.

“He has the ability to help students learn difficult concepts by breaking them down into simple, memorable steps,” said Smith. “When I was in grad school, he was my faculty mentor for my preceptorship, and he allowed me many opportunities to observe him lecturing. Even though I sat through several different sections of the same lab, I was always fascinated by his ability to connect with students and to help them learn difficult material. It is a privilege to call this man my friend and mentor.”

Located in southwest Ohio, Cedarville University is an accredited, Christ-centered, Baptist institution with an enrollment of 4,550 undergraduate, graduate, and online students in more than 150 areas of study. Founded in 1887, Cedarville is one of the largest private universities in Ohio, recognized nationally for its authentic Christian community, rigorous academic programs, including the Bachelor of Science in Nursing program, strong graduation, and retention rates, accredited professional and health science offerings, and high student engagement ranking. For more information about the University, visit www.cedarville.edu.