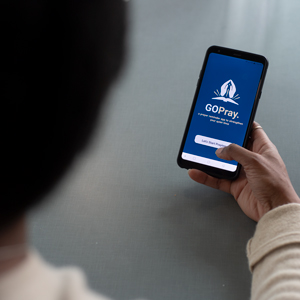 A group of three Cedarville University computer science seniors are putting their education and experience to the test with a capstone project of eternal proportions: a multiclient, mobile prayer app.

Yayira Dzamesi from Mentone, Indiana; Joshua Tarwater from Cedarville, Ohio; and Noah Duncan from Ossining, New York, have been working together since early fall 2020 on the GOPray app. The project was initiated by Cedarville’s computer science faculty.

Patrick Dudenhofer, assistant professor of computer science and cyber operations, played an influential role in the project’s preliminary development. He highly encouraged the idea, took on the role of first client to help shape its guidelines, and became the project’s faculty advisor when it was selected.

I began to think of a prayer app where you can list requests, they’ll stay present for a specified period of time, and then, they’ll be moved to an archive to keep requests up to date." 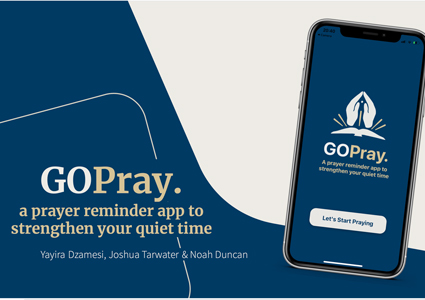 “The senior capstone is structured to create projects for certain types of ‘clients’ that we may have in a real work setting,” Dzamesi noted. “Some of the project options are continuations of past students’ work, but we really liked that this one was brand-new, and also that Prof. Dudenhofer would be one of our clients.”

“Initially, the goal was just to develop a prayer app with specific prayer requests and specific reminders,” Tarwater added.

However, as more clients and specific guidelines came in, the scope of the project broadened.

Dudenhofer connected Cedarville’s Global Outreach (GO) office, which coordinates local and international ministry efforts, about the app to secure them as a secondary client. Later, they added Dr. Kevin Jones, assistant professor of education and school of education dean, as a third client.

“Dr. Jones was interested in finding a way to share prayer requests with alumni around the world,” Duncan noted. “We set up a meeting to share what we were doing and see if it aligned with his goals, and he seemed over the moon about the compatibility of our directions.”

Alongside Jones’ hopes for alumni prayer connections, the GO office hopes the Cedarville Prayer App will be incorporated with its missions emphasis by highlighting prayer requests for missionaries, unreached people groups, and other ministry opportunities.

Additionally, Dudenhofer hopes the app will serve as a practical tool for individuals looking to manage and organize their prayer requests.

“In normal prayer journaling, you’ll often write down a request, and it stays on your list without any later follow-up if it’s been answered or not,” Dudenhofer explained. “Those can keep compiling and become overwhelming, so I began to think of a prayer app where you can list requests, they’ll stay present for a specified period of time, and then, they’ll be moved to an archive to keep requests up to date.”

After months of planning, researching, testing software, coding, designing, and developing, the student team is finalizing its prototype, which can be downloaded onto certain devices. They’re expected to showcase the new app with students this month to gather feedback from outside users.

“I think we expected a lot more roadblocks, but much of the development has been encountering those problems and just working through them ourselves,” Tarwater said. “We’re excited to see what people who haven’t walked the process with us have to say.”

Currently, the team is exploring ways to scan prayer requests into the app via QR codes. They’re also considering different routes of app publication, as well as the practicality of app maintenance after they graduate.

“There’s still a lot of work to do, but I really think this app will be successful,” Dudenhofer noted. “It’s an accomplishment to reach the testing portion of a project like this, and it’s good to get feedback from users who are unfamiliar with the development process. I’m excited about it.”

Located in southwest Ohio, Cedarville University is an accredited, Christ-centered, Baptist institution with an enrollment of 4,550 undergraduate, graduate, and online students in more than 150 areas of study. Founded in 1887, Cedarville is one of the largest private universities in Ohio, recognized nationally for its authentic Christian community, rigorous academic programs, including the Bachelor of Science in Computer Science program, strong graduation, and retention rates, accredited professional and health science offerings, and high student engagement ranking. For more information about the University, visit cedarville.edu.