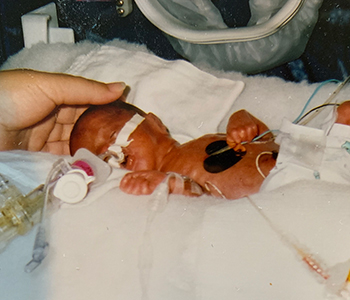 While moving her daughter, Morgan, onto Cedarville University’s campus in August, Melissa Rupp heard a familiar voice. One she hadn’t heard in nearly 16 years.

Melissa looked around and saw freshman student Rosemary Carman. Rosemary didn’t recognize Melissa, but Melissa recognized Rosemary from pictures. Seconds later, Melissa was embracing Rosemary’s mom, Angela. Now mothers of college students, they had met each other 18 years before as mothers of premature babies, or preemies, and they had last seen each other when their daughters were 2.

Rosemary was born 29 weeks into the pregnancy, weighing 2 pounds 6 ounces, while Morgan was born at 25 weeks, weighing 1 pound 9 ounces.

“We would consistently eat supper together and chat about how our days were going with our daughters." 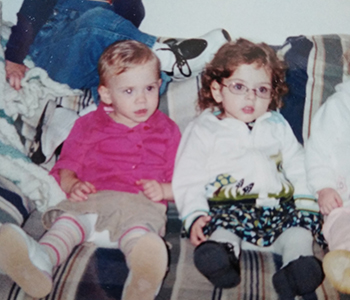 Both preemies required extended hospital stays, Rosemary at Toledo’s St. Vincent Medical Center and Morgan at Toledo Children’s Hospital. Since the hospitals were a distance from home, their mothers stayed at the nearby Ronald McDonald House. The two new moms formed a bond as they shared the experience of caring for preemies.

“We would consistently eat supper together and chat about how our days were going with our daughters,” recalled Angela.

“The Ronald McDonald House became our little safe bubble, and the Carmans became that other couple that we could talk freely and safely about our faith as well as our children,” Melissa added.

Though the families continued to send each other cards over the years, Rosemary and Morgan never met again after their 2-year-old reunion — until they both moved into their residence hall at Cedarville University.

“The fact that both of our girls are in college right now and at a fantastic place like Cedarville is truly an answer to prayer and God’s goodness to us."

Their families planned to meet at each daughter’s graduation party, but the families unknowingly scheduled the celebrations for the same day.

On college move-in day in early August, they discovered both of the girls selected the same college. “I knew I wanted to go to a Christian college, and I really wanted to go to a school where I knew my beliefs aligned with the university I selected. I also knew Cedarville had a good nursing program,” said Rosemary, a nursing major. Her parents graduated from Cedarville decades earlier, so coming to Cedarville seemed like a perfect fit.

Morgan, who is majoring in professional writing and information design, said she chose Cedarville because “it felt like home.”

Angela and Melissa were both thankful for Cedarville and the opportunity to reunite.

“The fact that both of our girls are in college right now and at a fantastic place like Cedarville is truly an answer to prayer and God’s goodness to us,” Melissa said.

“It was such a gift that morning because leaving Rosemary was hard that day,” Angela said. “I shouldn’t have seen Melissa because there were a lot of freshmen, but God ordained it. For me, it was one more affirmation that we’re in the right place.”

What began as a difficult time in their lives, both daughters born prematurely, has turned into a wonderful situation 18 years later. Now, the one-time preemies can learn and grow in the academic studies and spiritual journey at Cedarville University.

Located in southwest Ohio, Cedarville University is an accredited, Christ-centered, Baptist institution with an enrollment of 4,715 undergraduate, graduate and online students in more than 150 areas of study. Founded in 1887, Cedarville is one of the largest private universities in Ohio, recognized nationally for its authentic Christian community; rigorous academic programs, including the Bachelor of Science in Nursing and Bachelor of Arts in Professional Writing and Information Design programs; strong graduation and retention rates; accredited professional and health science offerings; and high student engagement ranking. For more information about the University, visit cedarville.edu.