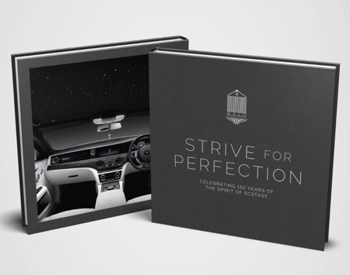 Cedarville University professor Jay Kinsinger’s custom wooden-bicycles brand, Sojourn Cyclery, was selected to be featured in Strive for Perfection: Celebrating 110 Years of the Spirit of Ecstasy – an official publication for the International Club for Rolls-Royce and Bentley Enthusiasts.

The yearbook, which celebrates the 110th anniversary of Rolls-Royce’s iconic Spirit of Ecstasy hood ornament, features a selection of luxury lifestyle brand and highlights some of the finest craftsmanship in the world, and for 2020 included a two-page feature on Kinsinger’s company. The publication was recently distributed to roughly 10,000 Rolls-Royce Enthusiasts’ Club members and to all Rolls-Royce and Bentley dealerships globally.

"Customers have described our bikes as the ‘Stradivarius of bicycles'."

“We’re so excited about the feature,” Kinsinger noted. “The luxury scene is a world we were trying to break into. Customers have described our bikes as the ‘stradivarius of bicycles,’ and with how frames can be customized and catered to the buyer, they are luxury items.”

While publicity isn’t new to Kinsinger’s company, which has been highlighted on PBS’s “ American Woodshop” and in Kiriakos Iosifidis’ 2017 book, “The Wooden Bicycle: Around the World,” its roots in Kinsinger’s childhood love for woodworking and bicycle-making have grown significantly from what were once just hobbies.

“My dad was a shop teacher, so I always had access to woodworking tools and a knack for building things, and I’ve been into bicycles my whole life,” Kinsinger shared. “I worked in bike shops through high school and college.”

In 1981, when Kinsinger was 20, he took his first handbuilt steel frame on a cross country trip with his 16-year-old brother, pedaling coast to coast. “I learned a lot from that — I was self-dependent on the trip,” he said. “But knowing I was riding something I had built made the experience even more organic.”

After years of building bikes for personal enjoyment and family, Kinsinger’s passions for woodworking and bicycles collided in 2010.

“One of the technicians at Cedarville showed me a picture of a wooden bike on the internet, and I knew I wanted to try to make my own,” he added. “I built my first wooden bike based on those web pictures. It took about 400 hours and was made completely with hand tools.”

From this initial wooden bike, Kinsinger’s project developed into a capstone course for Cedarville’s mechanical engineering senior students, which provided an avenue for testing the bikes, streamlining the manufacturing and creating a business model.

“We partnered with the school of business’ Beyond Entrepreneurship program and the innovative and industrial design program as well,” Kinsinger noted. “I took student representatives from the schools of engineering, business and industrial design to the North American Handbuilt Bicycle Show (NAHBS) in Salt Lake City, where we showcased a custom electric wooden bicycle.”

Sojourn Cyclery’s website was developed shortly thereafter by Ryan Lee, who graduated from Cedarville in 2018 with his Bachelor of Arts in marketing. Lee has continued to manage the business’ marketing and web design as it’s grown and evolved.

Other business developments include adding wooden bike-building workshops and semi-automating production. Each of Kinsinger’s bikes is produced with the help of a computer numeric controlled (CNC) router. He writes programs for the custom models, and then the router reads the programs and uses its spinning bit to carve out the specified bike frames.

As he reflects on his company’s development, Kinsinger is grateful for the opportunity to combine his passions and interests into a successful and healthy business.

“I’m never happier than I am when I’m working with my head, my hands and my heart,” he shared. “Putting those things together with creative design to physically produce something, I’m just so thankful I’ve been able to combine it all and run — or cycle — with it.”

Located in southwest Ohio, Cedarville University is an accredited, Christ-centered, Baptist institution with an enrollment of 4,550 undergraduate, graduate and online students in more than 150 areas of study. Founded in 1887, Cedarville is recognized nationally for its authentic Christian community, rigorous academic programs, including the Bachelor of Science in mechanical engineering program, strong graduation and retention rates, accredited professional and health science offerings and high student engagement ranking. For more information about the University, visit www.cedarville.edu.