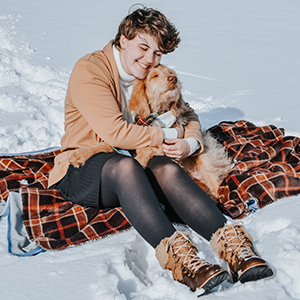 Cedarville University’s student organization K9s at the Ville will host its annual fundraising event, Pupperoni Night, on Friday, Nov. 12. It is open to both students and the public and will be held in the Stevens Students Center (SSC) event rooms from 6-8 p.m. Tickets cost $5 in advance at SSC tables or $8 at the door.

“Pupperoni Night is a fun-filled event with puppies, prizes, and pepperoni pizza,” K9s at the Ville president Mckenzie Brittenham from Millbury, Ohio, said. “Besides dogs and dinner, there will be desserts, beverages, raffle prizes, and a trivia game.”

All proceeds will go to K9s at the Ville’s partner, 4 Paws for Ability in Xenia, Ohio, a nonprofit organization with the mission of raising and training service dogs for children with disabilities and veterans with limb or hearing injuries.

“The first service dog I trained went to a little boy with seizures. It helped him to stabilize and to be able to do things he would have struggled with otherwise.”

The student organization not only hosts Pupperoni Night, but its members also volunteer on-site in Xenia in groups and individually and are currently helping raise two service dogs, Humble and Chariot.

“The first service dog I trained went to a little boy with seizures,” Brittenham said. “It helped him to stabilize and to be able to do things he would have struggled with otherwise.”

Each year, K9s at the Ville seeks to donate $1,000 to 4 Paws for Ability, and Pupperoni Night is a big part of the effort. “It supports our organization’s service, and it’s simply a lot of fun,” Brittenham added.