Rubik’s Cube Helps Champion Solve the Puzzle of His Future 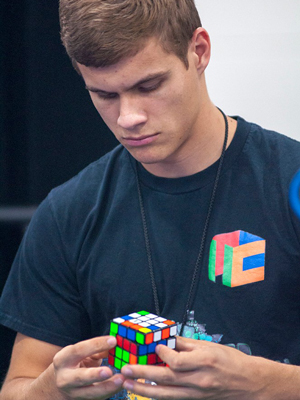 Solving Rubik’s Cubes changed the course of Drew Brads’ future career. And he has Costa Rica to thank for that.

Brads, a sophomore from Xenia, Ohio, had wanted to be an engineer since he was a little boy. At age 10, he began solving Rubik’s Cubes, which quickly grew into something more — a competitive game.

“The Rubik’s Cube is sort of mysterious,” explained Brads. “At first, I wanted to know how the combinations work to solve it, but later on, once I figured out how the thing works, it became very much like a sport or playing an instrument, where I was trying to refine my technique.”

Brads honed his skill to the point of being ranked third in the world for solving the Pyraminx Rubik’s Cube. He averaged 2.04 seconds to finish the three-dimensional puzzle at the 2017 World Rubik's Cube Championship in Paris, France. Brads also reached ninth in the world for the average 3x3 Rubik’s Cube solve at the 2019 fall Flag City competition in Findlay, Ohio, where he averaged 6.29 seconds to finish.

But those achievements are nothing compared to the true impact the Rubik’s Cube had on Brads’ life.

"I was forced to wrestle with what the Bible says about who I am and who God is."

During his senior year of high school, Brads went on a school mission trip to Costa Rica, which coincided with a Rubik’s Cube competition there. During the contest, he connected with a missionary family serving in Costa Rica.

Because of this interaction, Brads decided to take a gap year between high school and college to serve in Costa Rica, providing English and Bible classes for Costa Rican children.

“During that time, I was forced to wrestle with what the Bible says about who I am and who God is,” said Brads. “Once I put those pieces together for myself, I realized that I love sharing it with other people, which made me wonder if I should really plan on becoming an engineer.”

When returning to the U.S., Brads started attending Cedarville University to pursue a biblical studies major with a Spanish minor. He hopes to continue studying and teaching the Bible to others, whether through pastoral ministry or teaching at a high school or university.

“God has used cubing to form many friendships and opportunities and connections in my life,” said Brads. “In particular, I saw God's providence in directing me toward taking a gap year in Costa Rica through cubing connections. I wonder if God will use my cubing skills in the future?”

Located in southwest Ohio, Cedarville University is an accredited, Christ-centered, Baptist institution with an enrollment of 4,550 undergraduate, graduate and online students in more than 150 areas of study. Founded in 1887, Cedarville is one of the largest private universities in Ohio, recognized nationally for its authentic Christian community, rigorous academic programs, including the Bachelor of Arts in Biblical Studies program , strong graduation and retention rates, accredited professional and health science offerings and high student engagement ranking. For more information about Cedarville University, visit www.cedarville.edu