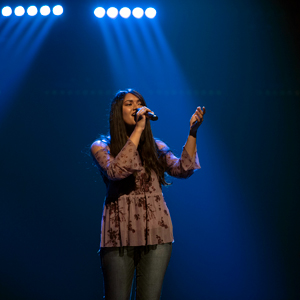 Cedarville University’s Department of Music and Worship will host its ninth annual songwriting contest open to all Cedarville undergraduate students. Participants should email a PDF file of a lead or chord sheet as well as an MP3 of the song to John Chilcote, assistant professor of worship, at johnchilcote@cedarville.edu by Friday, February 26, to enter.

“We really like having all undergrad students submit songs because not all people that are great songwriters are studying worship or music,” said Chilcote. “This contest is a way for students to be validated as songwriters, which is part of why we do the contest. It's not just to find the three best songwriters, but it's to build a community of songwriters at Cedarville.”

“The contest inspired me to really press into writing songs that are creative and musically appealing, but most importantly songs that are Christ-centered.”

The top three songs will receive cash prizes: first place, $300; second place, $200; and third place, $100. The only requirement for these songs is that they must be written for congregational use.

David Leonard was one-half of the Grammy Award-nominated duo All Sons & Daughters. He now is a Dove Award-winning producer and Dove and Covenant Award-nominated songwriter, including songs “Great Are You Lord” and “Christ Be All Around.”

Michael Farren is a Dove Award-winning and Grammy-nominated songwriter, worship leader, and producer. He is the writer of the number one radio single “Trust in You” recorded by Lauren Daigle, “Let It Rain,” and CityAlight’s “Yet Not I But Through Christ.”

Lauren Smith is a member of Vertical Worship and is the worship leader at Harvest Bible Chapel in Illinois. She is best known for songs like "Over All I Know,” “Real Thing” and “Live Again” recorded by Sean Curran.

The songwriting contest provides a unique opportunity to receive industry-level feedback on your songs,” said Noah Ayers, 2019 winner of the contest and junior worship major from Cedarville, Ohio. “When my song “Jesus Our Savior” won, I received invaluable feedback on the lyrics and music as well as the opportunity to lead it in the Cedarville Thanksgiving chapel. I’m so grateful that Cedarville supports up-and-coming Christian artists by providing opportunities like this.”

“In the last few years, I've truly felt the Lord calling me to work in worship ministry, and by realizing that, he is showing me that my songs, which initially were my own personal thoughts and prayers, can help minister to others as well,” said MacKensie Prosser, 2019’s second-place winner and senior worship major from Enon, Ohio.

“I got some really helpful and encouraging feedback on my song from Michael O'Brien, Krissy Nordhoff, and Matt Merker; amazing songwriters that I've really grown to admire in the Christian music industry,” continued Prosser. “The contest inspired me to really press into writing songs that are creative and musically appealing, but most importantly songs that are Christ-centered.”

Located in southwest Ohio, Cedarville University is an accredited, Christ-centered, Baptist institution with an enrollment of 4,550 undergraduate, graduate, and online students in more than 150 areas of study. Founded in 1887, Cedarville is one of the largest private universities in Ohio, recognized nationally for its authentic Christian community, rigorous academic programs, including the  Bachelor of Arts in Worship program, strong graduation, and retention rates, accredited professional and health science offerings, and high student engagement ranking. For more information about the University, visit www.cedarville.edu.