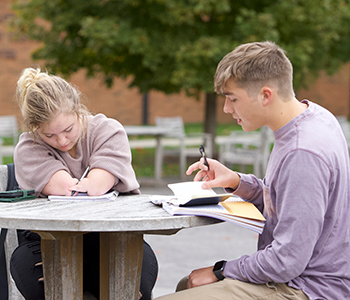 In preschool, Marissa Conrad won awards for best handwriting in her class, which is more remarkable than you think since she has no hands.

Now a sophomore majoring in psychology at Cedarville University, Conrad has continued to push herself in every area of life. Despite her disability, Conrad has enjoyed learning football, playing the cello, shooting airsoft, and rowing boats.

Conrad, from Buffalo, New York, explained that going through life without hands has not been the only challenge. In middle school, she waded through her parents’ divorce, her mom’s diagnosis of cancer, and a transition to a different high school.

“It has been eye-opening to understand that God created me like this for a purpose.” -Marissa Conrad

During these years of external crisis, Conrad struggled internally with why God would choose to create her differently.

“I am so obviously different that sometimes people assume I can’t do much,” said Conrad. She continued to explain that even when people did see her capabilities, they did not always know how to express their admiration.

When Conrad enrolled as a freshman at Cedarville, life did not immediately improve. “It took a while for me to get my priorities right,” she said.

But, Conrad began to have more conversations with people about her life experiences, which helped her adjust to college life and to re-prioritize what mattered most to her. She even received private messages of encouragement from those who have noticed her joy-filled living despite her disability.

These conversations with faculty and students have generated more confidence for Conrad and helped her work through her personal struggles.

“The more people kept asking me about my disability, the more I was accepting of my differences,” Conrad explained. Through her freshman and sophomore years, Conrad has gradually concluded that “most people are more afraid of offending me than of the difference itself.”

Realizing this has influenced Conrad’s life trajectory. She believes that much insecurity can come from an unwillingness to approach the topic of disabilities with people avoiding it altogether for fear of offending the one with the physical challenge. However, to spark conversations, Conrad recently got a tattoo, displaying God’s hand touching Adam’s hand, as in Michaelangelo’s famous fresco, representing that God created her exactly how he wants her and that her disability is not a flaw.

Conrad wants others to know that with a thoughtful, kind approach, “It’s OK to ask questions about our disabilities.”

In addition to changing the popular perspective on conversations about disabilities, Conrad wants to use her studies in psychology and her unique differences to become a therapist for disabled children. “I would have struggled to trust and believe someone who didn’t also have a disability,” Conrad said. And so, she desires to become someone who disabled children look up to and trust.

Conrad’s time at Cedarville University where she has spent more intentional time reading the Bible has changed her life for the better. “It has been eye-opening to understand that God created me like this for a purpose.”