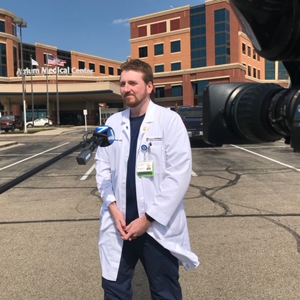 100. It’s a big deal. When someone reaches their 100th birthday. Or, engaged couples realizing it’s only 100 days till their wedding. And for three Cedarville University faculty members, completing 100 media interviews in a single academic year is an achievement worth celebrating.

All three faculty members surpassed 100 media interviews in a season where communication practices have been deeply impacted by COVID-19 safety protocols.

“I do interviews because it is a way to represent Cedarville University, and the kingdom of God, to a broader world." 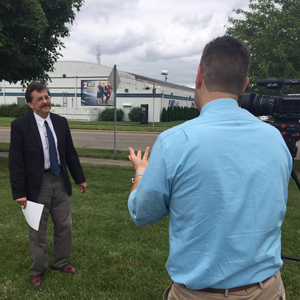 While each has reached the 100-interview milestone, Dr. Smith has nearly lapped his colleagues by participating in 202 media interviews. Dr. Jenkins has been interviewed for 120 news stories on COVID-19,  Dr. Clauson is at 102, and in the near future, Dr. Glen Duerr, associate professor of international studies, is expected to reach 100. He has completed 83 interviews.

Reaching these accomplishments in a COVID-19 year is remarkable. Normal processes were scrapped for innovative methods and faculty adjusted their schedules to accommodate media requests.

“In the past, I have often gone into radio or television studios to speak directly with hosts and anchors, but that has rarely happened this year due to COVID restrictions,” said Smith.

But this hasn’t slowed down the media machine at Cedarville. Since the university created a campus newsroom that facilitates live and recorded radio and TV interviews with stations across the country, the need to travel has been reduced. Also, because of COVID, most news outlets have embraced alternative interview options like Zoom, Skype, and FaceTime.

Television stations, news outlets, and radio stations throughout the Midwest, and as far as Washington State, Florida, Canada, and Russia, have turned to Jenkins, Smith, Clauson, and Duerr for their insight. When addressing complex topics like health care policy and the nuances of constitutional law for these media platforms, Jenkins, Smith, and Clauson aim to communicate the technical terminology of their discipline with clarity that can be understood by the general public.

The sheer volume of interviews this academic year has challenged Cedarville’s leading media experts to constantly grow, adapt and learn in their fields of expertise.

“The interviews have caused me in some cases to look up more obscure or rare issues that I didn’t know as much about beforehand and do more research on them,” said Clauson. “It expands my knowledge, which is something I can use in my classes — so my students also benefit.”

Conducting media interviews is not something that is planned as much as the faculty would desire. But that’s the nature of breaking news.

“If a breaking news story happens and a news outlet wants to speak quickly, I may have to head to my office, throw on a blazer and be ready for a Zoom call all within 15 minutes,” said Smith, who also wears a bow tie in his interviews. “That means I have to be knowledgeable and aware of things without much time for preparation at that moment.”

While politics is a dynamic field where issues can develop and change quickly, science usually moves more slowly. But that shifted with the pandemic.

“Each week, I have to navigate an onslaught of medical literature, news stories, and social media trends that seem to change at a moment’s notice,” said Jenkins.

Though participating in media interviews is a component of their jobs, Jenkins, Smith, and Clauson find motivation in a greater purpose.

“I do interviews because it is a way to represent Cedarville University, and the kingdom of God, to a broader world,” said Smith. “It is a chance to reflect the love of Christ to others and glorify God in the process.”

With their popularity among the media, Smith and Jenkins have developed weekly segments on local and regional media outlet programs. Smith can be heard every Thursday on WHIO radio, talking with Larry Hansgen on current political topics. Likewise, Jenkins is a weekly regular on “Mornings with Carmen” on Faith Radio in Minneapolis. Smith has a bi-weekly segment on the Minneapolis station.

As a result of their labor with the media, Cedarville’s exposure has increased significantly, which raises the workload for the faculty.. With the combination of news stories about Cedarville University and the faculty expert interviews, the university has been part of more than  1,050 news stories since the academic year began in July. One year ago,  Cedarville was part of 1,186 news stories--the most in the university’s history.

And, what began as a more local media relations focus has turned into a regional and national opportunity for Cedarville. University faculty have been part of news stories with outlets in Miami, Spokane, Washington, Chicago, as well as with Christian national outlets K-LOVE and the Christian Broadcasting Network (CBN).

Located in southwest Ohio, Cedarville University is an accredited, Christ-centered, Baptist institution with an enrollment of 4,550 undergraduate, graduate, and online students in more than 150 areas of study. Founded in 1887, Cedarville is one of the largest private universities in Ohio, recognized nationally for its authentic Christian community, rigorous academic programs, including its Bachelor of Arts in Political Science and Doctor of Pharmacy programs, strong graduation, and retention rates, accredited professional and health science offerings, and high student engagement ranking. For more information about the University, visit www.cedarville.edu.