Summertime is that beloved season for moms, dads, and kids to pack the family vehicle to the brim, fill the roof luggage carrier to bulging, and load up on music, books, and games to pass the time as you trek toward an iconic destination. Or in other cases, packing the suitcases, a carry-on, and a favorite pillow for an airplane adventure.

But how can this wonderful family memory become even more special? By looking at the journey, and the destination, through God’s eyes. Family travel can produce wonderful memories, but prayerfully and through a biblical lens, they can morph into something even more amazing — a Transformational Road Trip. 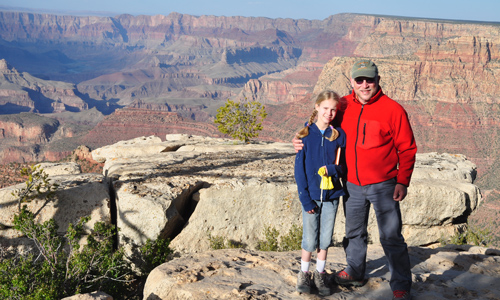 Believe it or not, when most people visit the rim of the Grand Canyon, they take a couple of selfies, gaze for a few minutes, check an item off their “bucket list,” and leave — all averaging less than 15 minutes! If you get a chance to visit the Grand Canyon, I suggest you spend a little more time than the average tourist. Hike a short distance down one of the Canyon’s many trails, take your Bible and some water, find a shady spot, and spend an hour contemplating the following:

The rock layers that you see before you were made during the global Flood of Noah and resulted directly from God’s judgment on man’s sin (Gen. 6:5–8). By the way, the Canyon itself was cut following the Flood. The layers in the Grand Canyon are typical of marine rocks that cover every continent. As you consider the vast expanse of the rocks and realize that similar rocks occur worldwide, the consequences of sin should be rather sobering.

You can’t begin to appreciate the size of the Canyon unless you’ve actually been down in it. As the crow flies, the distance from Grand Canyon Village to the North Rim is about 12 miles wide and the chasm between is nearly a mile deep. The hike from rim to rim is more than 20 miles. Thinking about the vast size of the Canyon, read Isaiah 40 and contemplate how big and truly awesome God is!

Read Psalm 104 and notice the great care God has for His creation. Note the special emphasis on water and the role that it plays in creation and judgment.

Read Psalm 103 and contemplate God’s care for each one of us as individuals. Despite the vastness and greatness of His creation, He deeply cares for each one of us — much more than the height of the heavens above the earth (v. 11). And, He casts our sins as far as the east is from the west (v.12).

John Whitmore is Senior Professor of Geology and has been to the Grand Canyon dozens of times since his first trip in 1979, which includes 16 raft trips with Canyon Ministries and Answers in Genesis. Cedarville now has more than 40 geology graduates from the program he began in 2009. Whitmore earned his Ph.D. in biology with a paleontology emphasis from Loma Linda University. 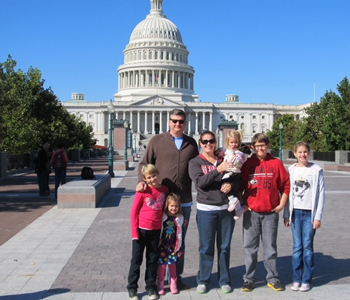 Washington, D.C., like any great city, can be experienced in a few days. You may not unearth every treasure, but you’ll discover plenty of jewels if you plan carefully. And you'll also see the faith of our nation's founders in small and large ways throughout.

The National Mall is a required destination. The massive green space connects the United States Capitol to the Washington Monument, and just beyond that, you will see the Reflecting Pool and the Lincoln Memorial. Smithsonian Museums (American History, Natural History, Air and Space, Museum of the American Indian, and the Museum of African American History and Culture) surround the Mall. You will also find the United States Botanic Garden, the National Gallery of Art, the United States Holocaust Memorial Museum, and the Museum of the Bible in the same area. You can spend an hour or a day in each of these spaces, depending on your family’s patience and interest.

The Lincoln Memorial is most powerful after dusk. Lincoln’s towering presence must be experienced. Take a few moments to read the walls, where you will see the 16th president’s most famous words. Note on the north wall his second inaugural address, in which he clearly and repeatedly mentions the providence and plans of God, stating, “The Almighty has His own purposes” and “the judgments of the Lord are true and righteous altogether,” quoting Psalm 19:9.

If you take the 87, or “four score and seven,” steps from Lincoln’s chamber to the Reflecting Pool, you will notice the Korean War Memorial on your right and the Vietnam Veterans Memorial on your left. Straight ahead, in the distance, is the World War II Memorial. The fluid, yet perfectly still, portrayals of Korean War veterans haunt the night. The names of the dead from Vietnam overwhelm even casual observers. At the World War II Memorial, note the 4,048 gold stars, one for every 100 American military deaths. These sacred grounds only barely communicate the sacrifices of those who died so that we might live in a land of peace and freedom.

Every family should schedule tours of the U.S. Capitol, the White House, and the Supreme Court Building. The Capitol Rotunda is magnificent. Pay close attention to the artwork, especially the Baptism of Pocahontas and the Embarkation of the Pilgrims. Look up to see the Apotheosis of Washington. The White House is smaller than you think, but fascinating, especially for those who enjoy early American furniture and learning more about our presidents and their families. The Supreme Court’s exterior is just as impressive as its interior. The east side of the building shows some of civilization’s great lawgivers, including Moses.

History reveals our past to explain our present and show us a glimpse of the future. It also reminds us of the people of faith who have shaped the nation. Every American should visit Washington, D.C., the city where our history lives.

Mark Caleb Smith is Professor of Political Science and Director of the Center for Political Studies. He earned his Ph.D. in political science from the University of Georgia. 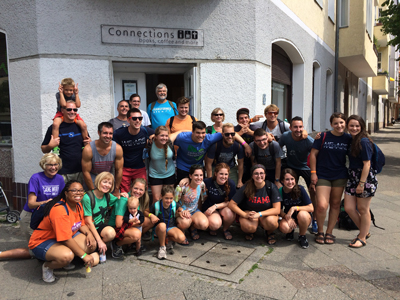 We had always dreamed of our family going on a missions trip together, so a few summers ago, when friends Steve ’89 and Becky (Davis) Dye ’89 asked us to consider leading a team of Cedarville students to Berlin, Germany, to help them with two weeks of vacation Bible school and camp, we began praying. We didn’t want to do it unless the whole family felt like this was the right thing.

None of us spoke German, and we knew this could be a challenge, even though the camps were going to be in English. It was also a lot of support for our family to raise! But we wanted our girls to experience another culture together — and see that the Church is not just “American.” As parents, we hoped this would be an incredible opportunity for our family to serve together.

If you have been on a short-term missions trip before, you know what happens. You go with the intent of being a blessing to others and allowing God to work through you, sharing the Gospel with people who need Jesus. But He always ends up blessing us even more than we can imagine, and He works in us as much as through us. Our trip to Germany was no different.

We did not go on this trip for our family to benefit; we tried to always put our focus on the ministry in Berlin. But we did benefit. We were able to see God provide financially for our family’s support in incredible ways. Our girls made new friends, both Cedarville students and people in Germany. We were able to learn world history and church history. From Luther and the Reformation to World War II and the Holocaust, we experienced lessons in the villages and cities where history took place. We were able to share the love of Jesus with believers in Germany, and with refugees who had not heard of Jesus and did not speak our language.

As a mom, to serve alongside my family and engage the culture with them was an incredible blessing. I will always remember the two days our team visited a refugee camp in Berlin. Language was a definite barrier, but the sport of volleyball opened up a common connection between my daughters and a young teenage mother. I also found that the other moms were interested to see my girls and then to share their children with me. The Dyes continue to nurture their friendship with a family that began because of that outreach. Ministry as a family is being intentional about what you are pursuing together and then trusting your children, knowing that they have amazing gifts God will also use to strategically reach others.

The trip wasn’t perfect, and neither was our family. There were challenges, and we didn’t always respond correctly. But one of our daughters said this: “I learned that there are so many people who don’t know much about Jesus, and those people are the ones who are most excited to learn. I want to be like them! I want to be excited to learn every day, even though I know about Jesus. It should give me a better and greater reason to learn and serve Him!” As parents, we couldn’t be happier.

Jeff Beste ’86 is Director of Strategic Relations in Cedarville University Advancement. He and Shelley (Fox) ’95 are the parents of Kylie ’20, Sara ’22, and Rachel.