With Music Videos, Now Is The Time to Worship 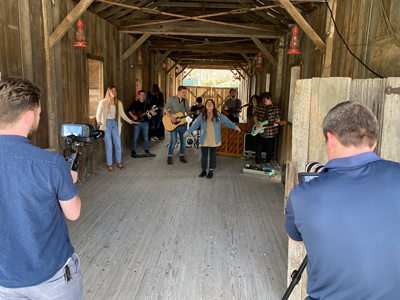 If you have a band or choir, and because of, oh, let’s say a global pandemic, you have less opportunity to perform for an audience, what do you do? In the modern digital age, the answer is obvious — share music videos online!

Due to COVID-19, Cedarville’s worship bands Resonance and Rekindle had limited options to perform both at Cedarville’s daily chapel and on the road at churches, youth retreats and other off-campus venues.

That’s when Dr. Roger O’Neel, assistant chair of worship and associate professor of worship, put forth the idea of creating videos that would allow the bands a chance to play while also promoting the school’s worship program.

“The primary purpose for all our bands is the gospel going out, the seed being sown."

Resonance’s Gold Band offered “Whole Heart” on the first video released in April. "Whole Heart" can also be downloaded from iTunes, Spotify, and other streaming services.

To watch "Whole Heart," click on the play button below:

Rekindle, an all-female worship band, will release its arrangement of “What Mercy Did For Me” on June 3, prior to Cedarville’s worship camps for high schoolers; and Resonance’s Blue Band video of “Graves Into Gardens” is slated to post on YouTube September 3, prior to its Labor Day opening act performance for Christian band, We The Kingdom, at the Champaign County Fairgrounds in Bellefontaine, Ohio.

Cedarville’s creative services director Chad Jackson and videographers Mark Tucker, Chris Massa, and Jacob Lashuay filmed, edited, and produced the videos, which were shot at three different historic locations: the Clifton Mill, site of the nationally famous Christmas lights display; the Cedarville Opera House in downtown Cedarville, built in 1888, one year after Cedarville was chartered as a college; and the second floor of Cedar Care Village Pharmacy, the full-service teaching pharmacy for Cedarville school of pharmacy students located in the former home of Cedarville Hardware, built in 1892.

“This was a great experience for our students and also a strong marketing and communications effort for our department,” noted Prof. John Chilcote, director for Resonance. “It was a real intentional move to support the program and highlight our students’ skills.”

Susan Troth, assistant professor of worship and director for Rekindle, sang the praises of the Cedarville Opera House, where their video was shot. “I love the vibe of the song, which has some gospel elements and incorporates several hymns, including ‘Nothing But the Blood of Jesus,’” she said. “It was really special being in the opera house. I appreciate the board of the opera house being so supportive, and the community at large.”

Troth is also especially proud of her students who arranged their own version of “What Mercy Did For Me” with her support and input, and who are contributing at churches around the country after graduation.

“Our girls are knocking it out of the park,” she said. “They’re just going into internships and assistant worship leading positions in large churches. It’s just amazing to see how God uses them; it’s so encouraging.”

“The primary purpose for all our bands is the gospel going out, the seed being sown,” Troth added. “Our worship degree has in-depth Bible training, with an extra 12 hours of biblical and theological classes over the Bible minor required for all other undergraduate degrees. Their training and their gospel focus really shows up when they go out to do ministry.”

Jubilate (pronounced joo-buh-lah-tay), Cedarville’s 70-member select mixed ensemble, also performs at churches, and normally goes on tour.  “Because of COVID, we had to reduce our choir to only 34 students, all of whom were worship majors,” commented O’Neel, the ensemble’s director. “We weren't able to travel, so I thought that doing a virtual choir song would be the best way to share and document our year.”

Using a webcam or cell phone, Jubilate members recorded a video of themselves singing “Here I Am to Worship” and O’Neel recorded himself conducting. “The videos were spliced together to make our virtual choir,” he explained. The Jubilate video is slated for release on YouTube in May.

Located in southwest Ohio, Cedarville University is an accredited, Christ-centered, Baptist institution with an enrollment of 4,550 undergraduate, graduate, and online students in more than 150 areas of study. Founded in 1887, Cedarville is one of the largest private universities in Ohio, recognized nationally for its authentic Christian community, rigorous academic programs, including the Bachelor of Arts in Worship, Master of Arts in Worship and Theology, and the Graduate Certificate in Worship Leadership programs, and retention rates, accredited professional and health science offerings, and high student engagement ranking. For more information about the University, visit cedarville.edu.