Monday, August 15, 2022
Cedarville University is expected to announce its largest student enrollment when official numbers are finalized in September. In anticipation of the high number of residential students, the university built Wood Hall last year, and the new $7.5 million residence hall was dedicated on Friday, Aug. 12, at 2 p.m. Students will begin moving into the new residence hall one week later.
Wood Hall is named in memory of longtime Cedarville administrator and graduate professor Dr. Duane Wood, who passed away on December 14, 2019. The residence hall for 108-120 women, slated to open in August, is located on the west end of the present Johnson and St. Clair residence halls, also named for long-serving administrators. 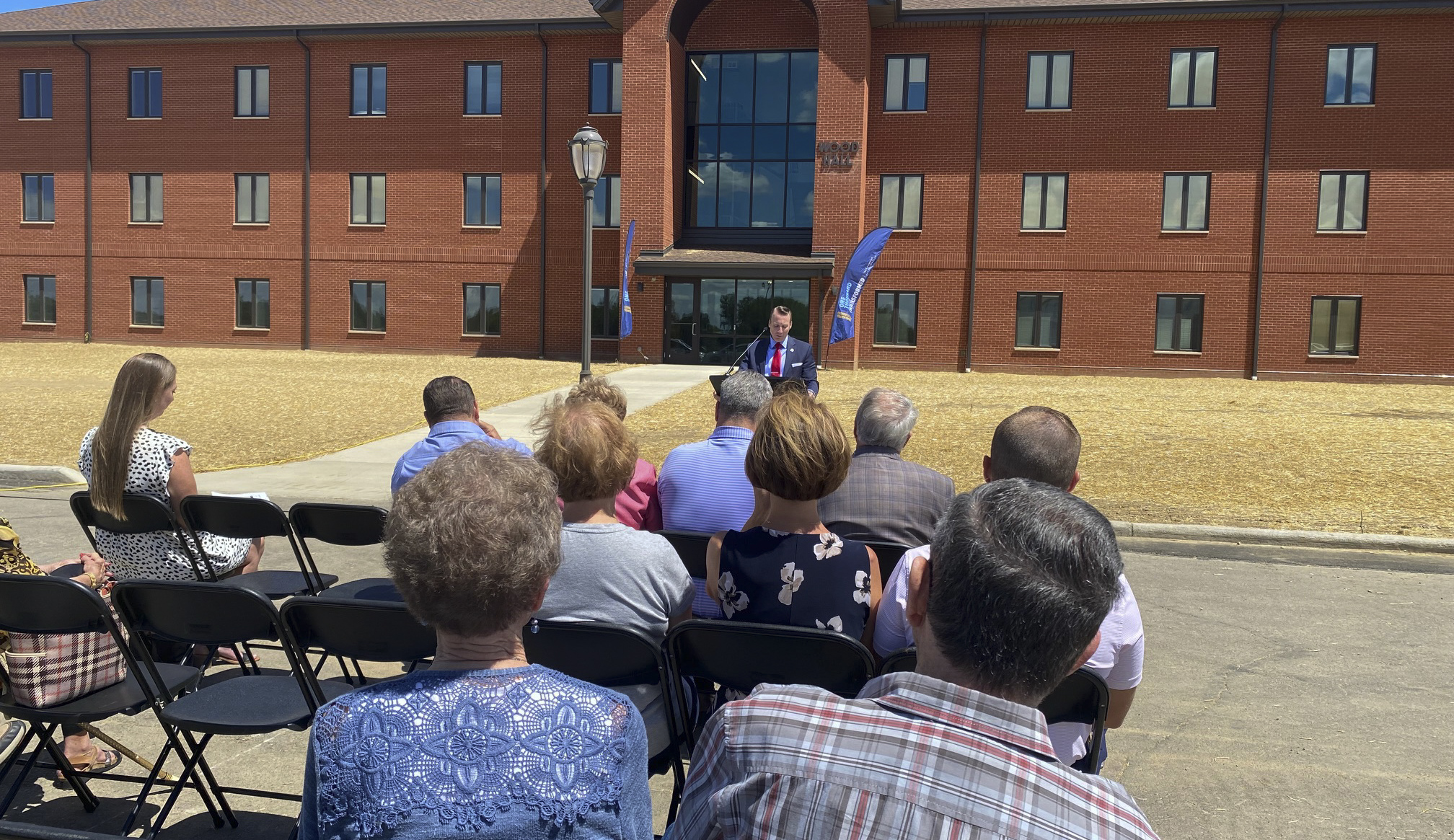 “As vice president for academics, Dr. Duane Wood’s influence on Cedarville’s educational enterprise was significant,” said Thomas White, president. “This new residence hall will help contribute to the life-transforming campus experience that is a part of the 1,000 days of every student at Cedarville — a vision that Dr. Wood was passionate about it as he led our faculty to teach with excellence, be innovative in their classrooms, and mentor and disciple students.”

Wood served as academic vice president from 1987 to 2005 and then as executive director of program development from 2005 to 2010. He built on Cedarville’s quality, and as the chief academic officer, he helped position Cedarville as a leader in Christian higher education, with multiple world-class programs launched during his tenure.

Most notably, Wood led the development of Cedarville’s school of engineering and computer science and paved the way for a school of pharmacy and the industrial and innovative design program in partnership with the International Center for Creativity in Columbus. He also oversaw Cedarville’s foray into graduate programs. For his service and impact on the university, Wood was recognized as Cedarville’s Honorary Alumnus of the Year in 2010.

“Duane Wood will be remembered for his faithfulness to Scripture, his passion for teaching and students, his boundless energy and optimism, and the academic legacy he built at Cedarville. He loved the Lord, served his church and family with excellence, and finished his journey well.”

The Duane Wood residence hall is part of Cedarville's 10-year master plan and its One Thousand Days Transformed: The Campaign for Cedarville.

The campaign is the largest comprehensive fundraising initiative in university history with a $125 million goal. Since the campaign was launched publicly in October 2021, the university has received financial commitments totaling $106.2 million.

The money raised will transform Cedarville’s campus and student-life experience. $92.5 million will be used to construct new university facilities, while $15 million is for student scholarships and affordability. The remaining $17.5 million will be split between enhancing the student experience ($10 million) and providing a long-term plan for institutional sustainability.

Cedarville recently completed an athletic and academic expansion to the Callan Athletic Center that houses the developing physician assistant program and the Master of Athletic Training program and provides a varsity weight room, team meeting space, and offices for the athletic department. The next scheduled project, the Scharnberg Business Center, is expected to break ground in fall 2022.
Located in southwest Ohio, Cedarville University is an accredited, Christ-centered, Baptist institution with an enrollment of 4,715 undergraduate, graduate, and online students in more than 150 areas of study. Founded in 1887, Cedarville is one of the largest private universities in Ohio, recognized nationally for its authentic Christian community, rigorous academic programs, including its Master of Athletic Training and Bachelor of Science in Allied Health, strong graduation, and retention rates, accredited professional and health science offerings, and high student engagement ranking. For more information about the University, visit www.cedarville.edu.