A Second Chance to Dance 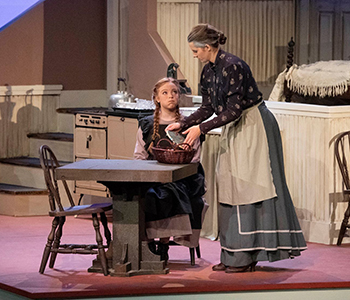 When Cedarville University sophomore Hannah Bradley walked out on stage as the lead character in “Anne of Green Gables” last fall, it was a stark reminder that just a few years ago, she couldn’t even walk.

When Bradley was 15, she contracted a life-threatening case of meningitis and was placed in a medically induced coma.

In the fall of 2017, Bradley, a sophomore theatre major from Pittsboro, Indiana, and her family took a trip to Miami, Florida, to celebrate her grandparent’s 50th wedding anniversary. She was excited about the special celebration but began experiencing excruciating headaches and nausea.

I had a severe form of bacterial meningitis that has only a 25% survival rate.”

She was taken to the emergency room, not knowing that she was suffering from strep pneumococcal bacterial meningitis.

Bradley was no stranger to illness. Growing up, her mom called her “the healthiest sick kid she ever knew.” With numerous bouts of pneumonia, several burst eardrums, and frequent fevers, Bradley had learned to cope with sickness. But only a few weeks before her trip to Florida, the doctors began to wonder if she might have a condition called common variable immunodeficiency (CVID), an immune deficiency disease present in only one in 25,000.

“My condition makes it so that I cannot produce my own antibodies,” said Bradley. “What I didn’t know going to Florida was that I had bacteria in my sinuses that, due to my condition, was attacking my brain. I had a severe form of bacterial meningitis that has only a 25% survival rate.”

Bradley says she remembers nothing after getting to the hospital, but for her parents, it was an agonizing 10 days of waiting while she was intubated and placed in a medically induced coma.

“They tried to wake me up once, and I was not responding,” said Bradley. “I was this close to the Lord calling me home. My parents told me later that they took a walk in the parking lot and prayed. They had to surrender to the Lord, to say that if it was His will that I not come out of the coma, they were going to accept it.”

Twelve days after going to the hospital in Miami, Bradley woke up.

“They took the tube out of my throat and had put a breathing tube in my nose,” said Bradley. “It was terrifying to wake up and feel like I couldn’t breathe. The infection caused stroke-like symptoms in my brain, and I couldn’t move on my own. I couldn’t even hold my own head upright.”

After 24 days in the hospital in Miami, Bradley took a medical flight to Riley Hospital for Children in Indianapolis, where she remained for another 26 days receiving in-patient rehabilitation. After a total of 50 days in the hospital, Bradley was able to return home where she began the arduous process of re-learning to walk. With an additional three months of therapy, after moving from wheelchair to walker to cane, Bradley was able to move normally again.

“It was nothing short of a miracle,” said Bradley. “With the kind of meningitis I had, of those that survive, 25-50% struggle with long-term debilitating physical or mental effects.”

Not only is Bradley able to walk, but she dances and sings on stage. A musical theater lover since seeing her first Broadway play, Beauty and the Beast, at age 4, Bradley feared the long-term effects of meningitis might keep her from ever appearing on stage again.

“I remember seeing the date in the hospital and telling my mom that I was supposed to be in my high school production of “Sherlock Holmes” that day,” said Bradley. “She told me that the school had postponed the play until I was able to perform. To this day, “Sherlock Holmes” is one of my favorite plays I have been a part of. The love and support from those around me was so encouraging.”

For Bradley, the experience almost served as an answer to prayer.

“I had been struggling with my faith. I didn’t feel God’s presence, and I was wrestling with knowing if I was actually saved,” said Bradley. “This experience taught me to completely trust God. I am very independent; I struggle with asking for help. But after my coma, I couldn’t walk, brush my hair, put on my own glasses. I have a picture of my dad holding my head up when my neck was too weak. I became dependent, on others and on God. He taught me to submit and depend and trust through that experience. In the past, God’s sovereignty had always scared me. Now, it is one of my favorite things about God’s character.”

Bradley calls the experience her second chance at life and works to remain thankful for her health. She currently studies musical theatre and was the lead in Cedarville University's fall production of “Anne of Green Gables.” She will also be participating in this year’s winter musical in the chorus and ensemble and will be the stage manager of this year’s spring play.

“Christians always talk about living with a sense of urgency, of not knowing what day will be your last,” said Bradley. “I am all too familiar with the experience of everything changing in an instant. And yet it is hard to live that way. I know that God kept me on earth for a reason, and in whatever I do, I want to glorify him with my story.”

Located in southwest Ohio, Cedarville University is an accredited, Christ-centered, Baptist institution with an enrollment of 4,715 undergraduate, graduate, and online students in more than 150 areas of study. Founded in 1887, Cedarville is one of the largest private universities in Ohio, recognized nationally for its authentic Christian community, rigorous academic programs, including the Bachelor of Arts in theatre, strong graduation, and retention rates, accredited professional and health science offerings, and high student engagement ranking. For more information about the University, visit cedarville.edu.