This fall, Cedarville University’s theatre department performed “The Giver,” a play based on the well-beloved book written by Lois Lowry, also adapted for film.  The show was a success, but one of the biggest impacts was on the actors themselves.

To the surprise of the entire cast, a visiting guest from the Kennedy Center American College Theatre Festival nominated two students to compete for a scholarship and awarded three certificates of merit to selected members of the show’s cast. 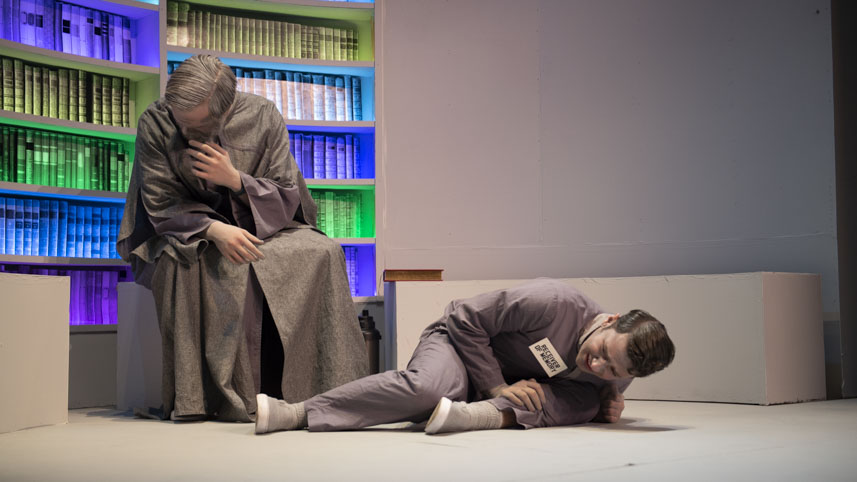 Cast members Ben Konuch, a sophomore marketing major from North Olmsted, Ohio, and David McFaddin, a senior music major from Delaware, Ohio, were nominated for the Irene Ryan Award Scholarship. Konuch and McFaddin are eligible to first participate in a regional audition, with the hope of qualifying to move on to a round of auditions at the national level to compete for the scholarship.

Konuch played Jonas, the lead; McFaddin played the titular character of the Giver. This was Konuch’s second role in a Cedarville production and McFaddin’s first.

“It improves the caliber of theatre in the college circuit,” said Stacey Stratton, assistant professor of theatre, “and allows students to get used to objective feedback.”

“The Giver,” a show set in a bleak future, is mostly devoid of color. Bradley’s job as stage manager was to call the lighting and sound cues as the main character Jonas started exploring his various senses. Bradley used projections to show this story of discovery to the audience. “It was tricky timing, but it made the show look spectacular,” she explained. “It was really special to know someone noticed the work I put into the show and how that affected the story that we told.

“I always encourage people to come see Cedarville shows,” Bradley said. “A lot of kids put a lot of work into them. I just love what theater can do to affect people. It’s just a neat experience. Even if it’s not one of our shows, go see a show. It’ll probably change something about your life.”