Swift reactions and execution are key factors in winning a tennis match, but for Dr. John Vitaliti, an anesthesiologist, it also made the difference in saving his friend Abraham Awabdy’s life when he fell into cardiac arrest.  Vitaliti and Cedarville first responders were honored by Premier Health at a special ceremony Tuesday, Aug. 9 at 8 pm at the Cedarville Township Volunteer Fire Department.

Vitaliti, from Beavercreek, Ohio, and Awabdy, 81, from Cedarville, Ohio, were playing a tennis match at the Cedarville University tennis courts on July 8, 2022 before Awabdy fell to the ground. 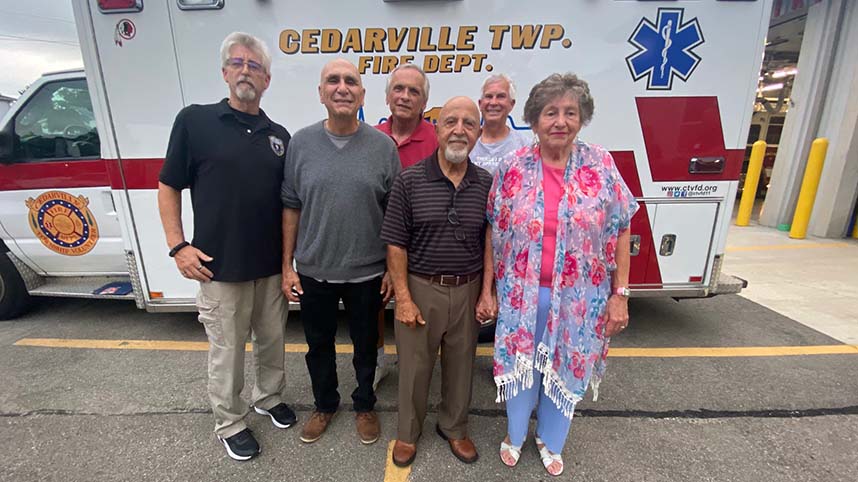 "When Cedarville Township EMS and campus safety personnel arrived, they were able to use an automatic external defibrillator to revive his pulse and quickly transport him to the hospital,” said Vitaliti.

Without the quick thinking of Vitaliti and the other first responders, Awabdy may not have made it to the hospital, where he recovered to the point he could return home three days later.

“The survival rate for people going into cardiac arrest is only 12%, it’s pretty rare,” said Elizabeth Sheridan, EMS coordinator with Premier Health’s Miami Valley Hospital (main campus) and Beavercreek Emergency Center. “These circumstances point to divine intervention,” said Vitaliti. “God put me there at the right moment because the Lord had more plans for Abe.”