The annual “Printy Wars” has been a long-standing tradition at Cedarville University. In fact, college students and faculty have participated in the residential unit-by-unit competition dating back to August 2002. 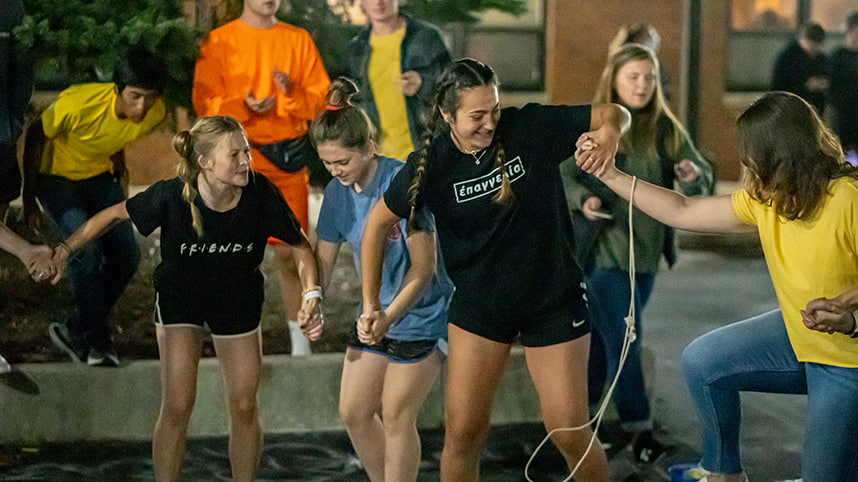 Printy Wars, which features skits, minute-to-win-it games and concludes with the annual tug of war, takes place Wednesday, Aug. 31, at 8 p.m. The event is held in the Printy Hall parking lot.

The first Printy Wars was “small, simple and unknown,” in the words of Courtenay Atwell, former resident director (RD) of Printy Hall and creator of Printy Wars.

When she became RD, Atwell quickly realized the culture in Printy needed more energy, so she encouraged upper-class students to become resident assistants (RAs) and help her transform the residence hall culture.

“I started challenging upper-class students to see it as a discipleship opportunity where they could pour into incoming freshmen,” said Atwell. “Once I had my team of RAs, we began brainstorming ideas on how to generate excitement and fun for the young women who lived on campus. One of the suggested events — Printy Wars — was a big hit and has been successful ever since.”

“Knowing that Printy Wars has become a long-standing tradition reminds me that ultimately God is the one working behind all of our efforts. I love knowing that current Cedarville students and faculty are participating in Printy Wars and developing lifelong relationships.”

Alexis McKay, the current RD of Printy Hall, shares Atwell’s heart of desiring her residents to further the thriving campus culture and build relationships. This fall will be McKay’s first Printy Wars.

“I love serving in a way that fosters meaningful, transforming relationships,” said McKay. Despite the changes that inevitably come to any campus, there are deeply rooted traditions at Cedarville that unite students across disciplines and graduation years. As for Printy Wars, McKay said, “I think we’ll keep it for a long time.”