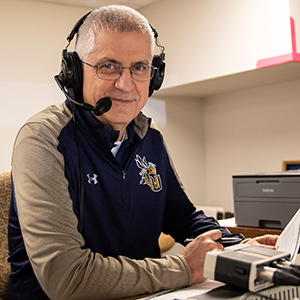 Ever watched the movie Hoosiers and imagined yourself making that game-winning shot for a championship? For Indiana native Mark Womack, it’s not just a fantasy, it’s a fact of his life that, even if he never worked at Cedarville, would have always connected him to the University.

Mark, who serves as Cedarville’s sports information director, graduated from Cedarville in 1982 with a bachelor’s degree in mathematics. His student-athlete experience was outstanding, as he played on the men’s basketball team and golf team, both of which played in two National Association of Intercollegiate Athletics national tournaments.

Whether Cedarville went to one of those tournaments pivoted on Mark’s jump shot. He made the last-second 15-foot swisher that sealed the victory over rival Defiance College that sent the Yellow Jackets to the 1981 NAIA tournament.

"The Lord has given me specific talents and a way to communicate and to use my interest in athletics to share about what Cedarville is, who we are, and who our students are."

It’s one of the biggest wins in Cedarville history and was secured by a guy who didn’t really expect to take the shot. More about that in the podcast.

Mark’s famous jumper was the last field goal made in the old Tyler Gymnasium, which is now Tyler Digital Communication Center. Home games happened in Stranahan Gymnasium beginning in 1982, located in the new (at the time) Callan Athletic Center. Callan is undergoing a historic makeover right now as part of One Thousand Days Transformed: The Campaign for Cedarville.

Mark’s playing days were only the beginning of a lifetime connection with Cedarville athletics. He is currently in his 39th year as Cedarville’s one and only sports information director (SID). In 2000, the NAIA-Sports Information Directors Association awarded him the Clarence “Ike” Pearson Award for his outstanding achievements as a SID.

Could Mark serve somewhere else? Perhaps. But this buzzer-beater has found his beat at Cedarville. He loves where the Lord has placed him — his former teammates are his forever friends who’ve been with him through thick and thin and he sees how God has provided him a way to make a difference through his passion for sports and for Cedarville.

“The Lord has given me specific talents and a way to communicate and to use my interest in athletics to share about what Cedarville is, who we are, and who our students are,” he shares during the podcast. “My only hope is in Him, bringing all that together to bring praise to Him.”

Located in southwest Ohio, Cedarville University is an accredited, Christ-centered, Baptist institution with an enrollment of 4,715 undergraduate, graduate, and online students in more than 150 areas of study. Founded in 1887, Cedarville is recognized nationally for its authentic Christian community, rigorous academic programs, strong graduation and retention rates, accredited professional and health science offerings, and high student engagement ranking. For more information about the University, visit www.cedarville.edu.