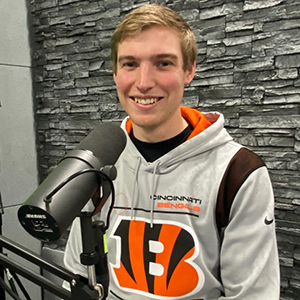 For Cedarville senior Kurtis Gould, it was a blessing and a dream come true wrapped up in one: His favorite NFL team, the Cincinnati Bengals, brought him on board as an athletic training intern. While Kurtis had to reality check himself a few times as he stood in the locker room with his favorite players, the experience would only become grander and more Super as the season progressed.

Gould’s internship had him on hand at practices and on the sidelines during home games over the course of the 2021 football season. His responsibilities included working with players in the training room, helping injured players with rehabilitation, setting up the medical tent for games, and keeping the team hydrated.

Kurtis’ confidence in his training and ability grew throughout this amazing season.

"I was consistent with them about who I was, and they respected that.”

He was part of the team of players, coaches, and strength and conditioning personnel in pursuit of a winning season, postseason success, and maybe, just maybe, a shot at the Super Bowl.

By the end of the season, Kurtis had become friends with the whole defensive secondary, familiar names to Bengals’ fans: Jesse Bates, Mike Hilton, Chidobe Awuzie, Eli Apple, and Von Bell. He celebrated with Joe Burrow, Ja’Marr Chase, Joe Mixon after big plays. He experienced the surreal atmosphere of a playoff victory in Paul Brown Stadium as the Bengals broke a 31-year drought by defeating the Las Vegas Raiders 26-19.

Kurtis was living the dream. But this young man, grounded in his faith, was experiencing something greater still — being a living testimony.

“When they would get talking about sexually immoral things, I would not participate with them, or when they would talk badly about certain people,” Kurtis explains during the podcast. “As the season went on, they would ask why I was that way, and I would say, ‘I believe in the Bible and living by a higher standard. I was consistent with them about who I was, and they respected that.”

Kurtis is part of the last class of Bachelor of Arts in athletic training students at Cedarville, as the program will shift to the Master of Athletic Training (M.A.T.) this summer. Incoming freshmen will have the option of a B.S. in sport medicine/M.A.T. accelerated completion option, allowing them to complete both degrees in just five years.