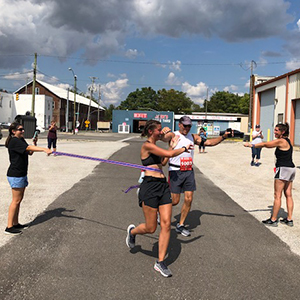 Cedarville University senior Arielle Wenig has the kind of long-range focus that can be rare for someone her age.

For example, most students begin their college search in high school, but Arielle began her higher education pursuit in fourth grade.

As part of a school project, she wrote to Cedarville and received all kinds of goodies, including a Cedarville pennant that she still owns. The admissions team also sent her enrollment paperwork, which she used as a senior when she applied.

This clear-eyed ability to focus down the road also helped her this fall as she ran a marathon with her dad, Bryan, when he turned 60. It was a long-held dream, something Arielle apparently is pretty good at fostering and realizing.

Arielle now has something new in her sights: the possibility of serving as a Cedarville professor someday.

Her 26.2-mile journey was even more meaningful since her dad was diagnosed with Parkinson’s disease last spring.

Arielle now has something new in her sights: the possibility of serving as a Cedarville professor someday. By now, it should be clear that once Arielle has a goal in mind, she is going to pursue it, no matter how long it may take.

Located in southwest Ohio, Cedarville University is an accredited, Christ-centered, Baptist institution with an enrollment of 4,715 undergraduate, graduate, and online students in more than 150 areas of study. Founded in 1887, Cedarville is one of the largest private universities in Ohio, recognized nationally for its authentic Christian community, rigorous academic programs, strong graduation, and retention rates, accredited professional and health science offerings, and high student engagement ranking. For more information about the University, visit cedarville.edu.