Cedarville Stories Podcast: "Your Prayers Are An Iron Dome" 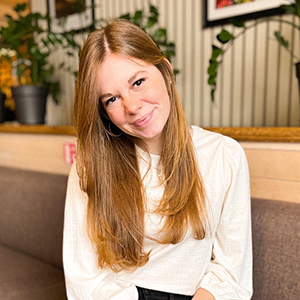 Some of Abigail Rist’s closest friends and loved ones are in the middle of a war zone. And she’s begging you: Don’t stop praying.Rist, a junior international studies major at Cedarville, grew up in the Ukrainian capital, Kyiv, when her parents moved there to serve as missionaries. Ukrainian President Volodymyr Zelenskyy has stayed in Kyiv, regularly broadcasting from there to the world, including a virtual meeting with the U.S. Congress.

The capital has been under siege by Russian military forces almost from the beginning of the conflict, with bombs striking Abigail’s neighborhood, including a train station just down the street from where she grew up. Debris from a downed Russian airplane damaged an apartment building across the street, and her elementary school, a childhood park, and a store where she and her brother got ice cream were damaged.

“You never expect to see home blown up or on fire,” she shares during the podcast.

“Surreal” is a word perhaps overused to describe what’s happening but is understandable for someone like Abigail who was just in Kyiv over Christmas break visiting friends and giving a stuffed animal to one friend’s baby daughter. That toy was one of the few items the family took with them when they evacuated.

What can you do when you see a country you love so brutally and mercilessly attacked?

This is one of three Cedarville Stories podcasts focused on the crisis in Ukraine. Episode 12 features 2021 social work alumna Leah Harper who is   serving Ukrainian refugees in Romania .