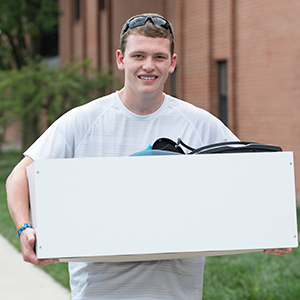 At the time, Logan, who is a senior IT management major, was then a senior at West Liberty High School near Urbana, Ohio. He was prepping for a mock trial and visited one of the school restrooms to check his hair. As he came around the dividing wall between the restroom and hallway, a classmate shot Logan in the chest and back.

After the shooter blasted the shotgun in the adjacent hallway, without anyone being harmed, he returned to the restroom to reload. Logan pleaded with the shooter to get help and not hurt anyone else. The principal and assistant principal rushed to the bathroom, and the shooter handed the gun over without further incident.

"I think I was the right person for that situation because of what God has done for me and the experiences He’s given me."

What could have been an even larger tragic school shooting came to a fairly quick resolution. But Logan was suffering.

He spent 15 days at Nationwide Children’s Hospital in Columbus and endured multiple surgeries and three months in a neck brace. Nightmares disrupted his sleep for the first month after the shooting. Logan still has roughly 200 birdshot pellets in his body, which require biannual checkups to check the lead level in his body.

Despite the pain and trauma, Logan's mindset is good. He admits to occasional bouts of mild depression and being in a crowd can still be difficult, but he’s healthy spiritually, physically, and mentally. He quickly gives Christ the credit for his healing and recovery.

Logan testified at his assailant’s sentencing hearing and forgave his classmate. The shooter is currently serving 23 ½ years in prison.

Logan’s survival is remarkable by itself, but even more striking is his faith and confidence in God during this devastating trial. He and his principal and assistant principal have spoken in school districts that have experienced active shooter tragedies. Logan is grateful for the story he is able to share.

“I’ve been able to share my faith and how God helped me and my community get through that situation with people who are grieving," he shares during the podcast. "I think I was the right person for that situation because of what God has done for me and the experiences He’s given me."

Logan’s story was first featured by Cedarville PR when he arrived as a freshman in 2018.