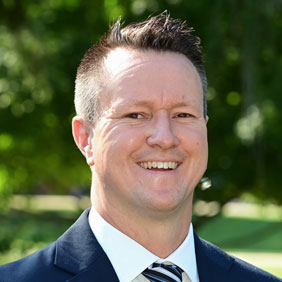 Will the conflict in Ukraine escalate into World War III? That thought has crossed the minds of some. Will the war

Dr. Glen Duerr, associate professor of international studies, notes that while the illegal Russian invasion of its neighbor to the south began as a localized conflict, it has the potential to become something far larger and more dangerous.

There is much yet to happen in world history prior to Christ's return, especially the evangelization of the nations, but Glen sees this military offensive as part of the “wars and rumors of wars” (Matt. 24:6), events that will transpire before Jesus comes back.

Such insight regarding the international stage as it intersects with God's plan was not on the mind of young Glen, an aspiring professional soccer player who ended up playing college then semi-pro till his passions shifted from the pitch to the classroom.

“We should speak the truth and speak boldly about what Vladimir Putin is doing, and how it’s illegal and it violates international law, but most importantly, it violates the 10 Commandments and God’s provisions for how we should live."

He is a professor of international studies at Cedarville, a position he has held since 2012.

Glen is an international person as well, having been born in the United Kingdom, then growing up and attending college in Canada, and finally emigrating to the U.S. where he earned a Ph.D. in political science at Kent State University. He is a citizen of all three countries.

While the political world and its complicated workings keep his able mind engaged, it was the Lord Jesus who captured his heart on July 2, 2000, during a tour of southeast Asia with an Athletes in Action traveling soccer team.

His keen insight regarding the international stage coupled with a biblical worldview puts Glen in a unique spot for offering counsel. What advice does he offer Christians in these troubling times?

“A biblical worldview gives us a way to think through it, and it also hastens us to share the Gospel, to be the hands and feet of Jesus,” he says during the podcast. “We should speak the truth and speak boldly about what Vladimir Putin is doing, and how it’s illegal and it violates international law, but most importantly, it violates the 10 Commandments and God’s provisions for how we should live and know that He is the ultimate judge. One day there will be a judgment for all this.”

Glen is an accomplished author. In 2021, he released, "Patriotism and the Cross: A Theology of Nationalism," which explores the Christian's relationship to government.