It’s not uncommon for Cedarville University students to be second- or third-generation students. But for Hannah Dow, a freshman  exercise science major, her family’s legacy at Cedarville spans five generations of students. 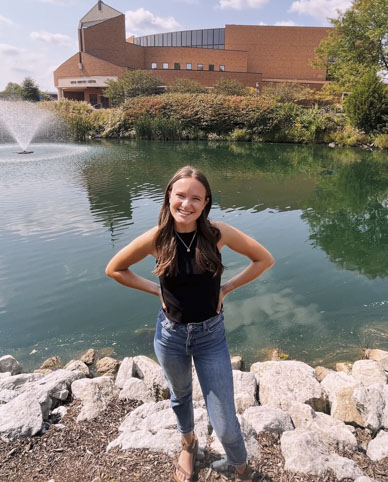 Dow remarked that often the first question she is asked is whether she felt pressured to attend Cedarville based on the rich family history.

“My family was very supportive and didn’t pressure me to go to Cedarville,” she noted.

She opted for Cedarville based on its own merit: its continuing steadfastness in Gospel care, generation to generation. “They are truly invested in caring for you as a person,” Dow continued.

“My family legacy wouldn’t have continued so long if Cedarville wasn’t home,” said Dow, with a tear in her eye. “Cedarville University is the one place I’ve always had – a hometown and a family. This is home.”

Growing up in a military family, Dow never had a hometown. Coming to Cedarville felt like returning to her roots.

“The hardest part is making my own path,” she said, remarking that her Bible professor also taught her parents and knows her through them.

“I came in with the mindset ‘don’t hide in their shadows, stand on their shoulders,’ knowing I have their example to avoid their mistakes and to follow their successes,” added Dow.

She is grateful for her family’s example, which has pushed her toward certain student organizations, course electives, and even her residence hall – Printy Hall. “We all have very similar personalities, so their advice has answered my questions before I even knew what they were,” said Dow.

Dow reiterated that Cedarville was her own choice based on her parents’ example.

“I chose Cedarville because I wanted the personal relationship with Christ that my parents have, and I’m finally understanding how central Cedarville was in the development of that relationship, as well as with their lasting circle of friends.”

Not only does Dow’s heritage boast five generations of Cedarville graduates, but when considering family members who did not attend Cedarville but worked at the university, the family tree stretches seven generations. John Calvin Stormont (the uncle of Dow’s great-great-great-grandfather) served on the board of trustees from 1892-1911, starting just five years after the college’s founding.

Additionally, Dow’s great-great-great-grandfather, J. Harry Stormont, served as Cedarville’s First Vice President from 1912-1916. At his death, both Cedarville College and Cedarville High School closed to honor his involvement as board member.

Further, Cedarville’s former Collins Hall was named in honor of Andrew Collins, Dow’s great-great-great-grandfather (Andrew’s granddaughter Charlotte married into the Stormont line). He vocally advocated for Cedarville’s high school to be built across North Main Street instead of the proposed site next to the university’s Founders Hall. This decision has enabled Cedarville University to expand to where it is today.

It is evident that Dow’s family heritage runs deep throughout the history of Cedarville. For her that can mean one thing: Cedarville has firmly stood on the word of God in the midst of an ever-changing culture.

Located in southwest Ohio, Cedarville University is an accredited, Christ-centered, Baptist institution with an enrollment of 5,082 undergraduate, graduate, and dual enrolled high school students in more than 175 areas of study. Founded in 1887, Cedarville is one of the largest private universities in Ohio, recognized nationally for its authentic Christian community, rigorous academic programs including its  Bachelor of Science in Exercise Science, high graduation and retention rates, accredited professional and health science offerings, and the #4 national ranking by the Wall Street Journal for student engagement. For more information about the University, visit cedarville.edu.